This article is from the Win-Spr 2018 AFRMA Rat & Mouse Tales news-magazine. 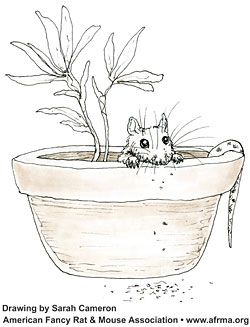 Re: Cut The Stink, WSSF 2017
Last issue we covered additives to the pet’s food/water, air purifiers, cleaners, and beddings. Other things to help cut the stink are plants and paint.

It has long been known that plants are good to have in your house for indoor air pollution. They not only absorb carbon dioxide and release oxygen, but did you know some plants can absorb formaldehyde, benzene, trichloroethylene, xylene and toulene, and ammonia1, 2?

Practically all the plants tested will remove formaldehyde which is common in many building products and used to make many car parts and some textiles to make them crease-resistant. Boston Fern (Nephrolepis exaltata ‘Bostoniensis’), Chrysanthemum or Pot/Florist’s Mum (Chrysanthemum morifolium), and Dwarf Date Palm (Phoenix roebelenii) were found to be the most effective in removing formaldehyde.

A plant’s ability to remove these harmful products makes them good to have where you have your animal cages and/or in your home. Just remember to keep them out of the reach of animals as a lot of plants are toxic if ingested. Make sure you keep the leaves clean so they can do their job. Plants will not only help with the air quality, but add some green to your environment.

2 Wolverton, B. C. and J. D. Wolverton. (1993). Plants and soil microorganisms: removal of formaldehyde, xylene, and ammonia from the indoor environment. Journal of the Mississippi Academy of Sciences 38(2), 11-15.


Most people have heard of stain blocking or waterproofing paint but paint is not something one would think of to help with odors in their animal room or house. There are paints on the market that claim they will absorb not only odors but also bacteria1, will reduce (but not eliminate) formaldehyde odors, pet, cooking, and cigarette odors, and some are mildew-resistant2. However, while the one EPA-registered microbicidal paint kills certain bacteria, it has n-alkyl dimethyl benzyl ammonium chloride, or quat, as the active ingredient to kill the bacteria3. Quat was found to be one of two chemicals found in the disinfectant Virex [Johnson Diversey] that caused birth defects and infertility in mice4.

There are many paints now that have low to zero emissions which makes them asthma and allergy friendly and are healthier for people or animals to be in a freshly painted room.

3 New Paint Kills Bacteria, but it Could be Hazardous to Human Health. Julie Fidler. November 1, 2015.


There are multiple ways to help control odor with animals. When using new products, make sure you do your research to find something safe that will work to your liking.