This article is from the WSSF 2014 AFRMA Rat & Mouse Tales news-magazine. 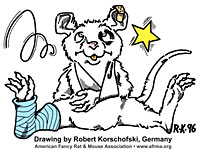 Michaela Przybilla-Mcclure, Facebook
QOur two fancy mice boys have been together since we got them from the pet store about 6 months ago. Two days ago they started to fight so bad that one of them had a bite wound so we separated them. Today I tried to put them back in the same cage and a few minutes later they were at it again.

AYes, male mice will fight at some point, sometimes before weaning, and must be separated and housed in their own cages or one may be killed. It’s very rare to have two males live together their entire life. Sometimes the calmer English show mice will get along for a while but they usually end up fighting at some point. Because of this, the females are much better pets when you want a group of mice (ideally with 3 or more). The following articles have more info on male mice:


For those wanting a single mouse and are prepared to put up with the natural musky smell that male mice have, then a male would be a good pet. Just remember that male mice are not like male rats that can be housed together to live as a group.

Many things have been tried to get males to live together as long as possible—have lots of toys, houses, more than one wheel; when cleaning the cage just clean the pee corners; clean the cage but leave the males and their house, toys, wheel, etc., in there while you scoop out the dirty bedding so there is little disturbance; just clean half the cage at a time; scoop out the dirty bedding and sprinkle some of the dirty bedding on top of the new; just use hay for the house so there is no furniture for any mouse to claim and defend as his own; clean/wash the cage and put in fresh bedding and the used toys and other items so their smell is in the cage; or put them in a freshly washed cage with all new/clean items so they spend more time investigating everything. Be prepared to have extra cages on hand for when none of this works anymore.