This article is from the WSSF 2014 AFRMA Rat & Mouse Tales news-magazine.

Niche Brislane, Facebook
QAny idea what can be done for a power-groomed rat? Her cagemate grooms her nonstop (I have just the two rats), but I do not want to separate them because I know being alone is hard for them. They do have a plethora of toys, outside time, and mental stimuli in the cage but the Blue girl (Hairless mix and has always had naked flanks) will not stop grooming my black Dumbo girl. The only time I ever catch her barbering my Dumbo doe is when they’re getting sleepy, when they’ve just had a big meal, or played outside their cage for a while. They don’t fight and are pretty mutual with their things. They frequently share treats so I’m not too sure what it could be. Checked for mites and other skin conditions. Any info would be incredibly helpful. 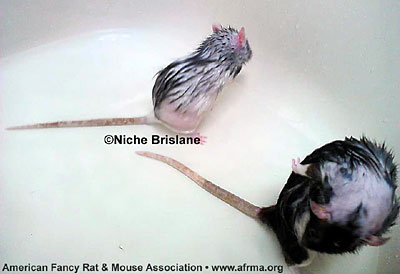 AIs the Blue one also chewing on herself? This is usually done on the front legs or belly. Is she older or younger than the Black? In some cases it is hormones or boredom and many times they will just stop after a few weeks. It could also be a dominance thing. One person found when they changed the rats’ diet, the one that barbered stopped chewing on the other rat. Perhaps changing the toys around every week so they get new toys may help. Or you could add a wheel if they don’t already have one. We have an article telling about barbering.

Mona Montague, Facebook
QI have three rats—two boys and one girl. I just lost one of my boys, Thadeus, 2 days ago. Out of nowhere he started losing his hair and became emaciated (cancer?). I was so so sad. Rats seem to get sick very easily, and I have already lost one female rescue to a tumor. The other companion to the deceased female now has a tumor. She was also a rescue. Is there anything I can do to help my rats live a longer, healthier life? I am pretty strict with their diets, they have cages with ample room, chew toys, etc. I know they don’t live too long, but I read they can live up to 5 years. I love my boys, and I would be so sad to lose another one so quickly. My boys are both 2 years now. Any info would be appreciated.

AThe average lifespan of rats is 2–3 years with 5 being a very rare case. A 2-year-old rat is the equivalent of a 60 to 80-year-old human and one 5 years old would be around 110. One day in the rat is equivalent to around 30 days for a human. There are several web sites where you can read more about this (How old is a rat in human years?, The Laboratory Rat: Relating Its Age With Human’s, Rat’s age versus human’s age: what is the relationship?, A Scientific Review of Age Determination for a Laboratory Rat: How Old is it in Comparison with Human Age?, How Old Is My Pet Rat Anyway?). There are even a couple calculators online where you can put in your rat’s age and get the human equivalent Ratty Age Calculator and Rat Age Calculator. A lot of factors go into how long a rat lives with genetics, diet, and environmental influences all playing a part in this. So keep sugary and fatty foods out of the diet, use organic foods when possible, don’t use scented sprays, candles, cleaning products, etc., or smoke around the rats www.afrma.org/med_ratsneeze.htm; we also have several articles on respiratory problems you can read on our Info Page. Buying rats from breeders that have a known health history on their rats and are breeding against tumors and other problems should help.

Tumors are common in females and they usually get them when they are around 2 if they get them. If your females get tumors at less than a year, then genetics is usually the cause. If your female with the tumor is 1½ to 2, in good weight, good health, no respiratory issues, then surgery can be beneficial. If she is already 2, then putting her through the added stress of surgery for only a couple more months without a tumor may not be best for her age. Unfortunately, rescues don’t have a known health history and many are from pet shop stock where selection against tumors is not considered in the breedings. So, when taking in rescues, a person has to be prepared for more health issues and usually a shorter lifespan. We have many articles on diet and tumors on the web site that should help answer your questions.

With the one that suddenly became emaciated, a necropsy would be the only sure way to determine what he died from. Many people will get a new set of rats when the original ones are around 2 so if they are left with a single rat, hopefully the old one will accept the new companions and not be alone for the last part of its life.