Lifespan of Domestic Rats vs. Wild Rats; What To Feed

From Tom Kennedy, e-mail
Q I’ve been reading up on rats as pets (my mother was a science student and kept rats and said they were sweet pets; I have neither the time nor space for a dog or cat), and I’m puzzled by something I read in one place that said while the domesticated rat lives only 2–3 years, the wild rat lives 5–7 years. This raises some questions in my mind. Why the difference? I know that studies of opossum in isolated areas (island habitats) have recently revealed strong genetic ties to lifespan and aging (as well as the number of offspring per litter), and I was wondering if this was due to something of the sort in the domestic breeding pool?

Generally domestication has a positive impact on lifespan in that certain diseases, hardships, and hazards are removed. If the wild rats and domestic rats came from the same gene pool so recently (1800s), then one would fully expect that they would have identical life expectancy, or higher in captivity. Of course a lack of exercise, and the stress of captivity affects certain animals negatively, but rats don’t seem to be the type that are: A) Highly nomadic so that captivity poses major stress, B) Anti-social so that interaction with others induces stress, or C) Sensitive in the sense that a Panda Bear or other animal is where any infringement on the environment induces massive stress. It seems to me that rats are too universal an adaptable an animal for that to be true.

So, after reading about the relatively short life span of a domestic rat, I have to admit I’m a bit disappointed, and I personally could no longer consider keeping one as a pet as I would become too attached to let go so quickly.

I was wondering if there was any breed or strain which actually had an extended life span (I imagine this might be of interest in certain laboratory experiments, so I thought perhaps I might look in science journals), or if there was an ongoing effort to breed longer-lived rats so that they had the effective life expectancy of their wild cousins? I would think that if rats lived to be 7–10 years old they would be a lot more appealing as pets.

A It is very interesting that you came across this figure. I have to wonder where the facts on wild rats came from because this is directly contradictory to everything I’ve come across. Every study I have read puts the life span of wild rats at under a year. In the first book I pulled out of my bookshelf there are no less than four studies cited that all conclude approximately the same thing . . . wild rat lifespan is typically 6.2–11.3 months.

I have to admit that the short lifespan of these animals is one of the only disadvantages to sharing our lives with them. Those of us who do own them find that the experience is well worth it, despite the fact that each one we lose is heartbreaking.

We would love to have rats live to be 7–10 years old. It isn’t going to happen. They have a very high metabolism and just aren’t designed to live that long. Even much larger animals like rabbits have a natural lifespan that is shorter than that. Many breeders do go to great lengths when breeding to chose pairings based on health and longevity as well as other factors. For these reasons, as well as an improvement in husbandry practices over the last 10 years, we have seen lifespans go from an average of 1½–2 years up to an average of 2–2½ and even 3. I myself have been very fortunate to have had two rats make it to over 4, but that’s rare.

As far as extending the lifespan of a rat, we have been told that it can be done. Though I have no experience myself on this topic, I have been told several times that if you restrict a rat’s diet and maintain it at just above starvation, it will significantly increase it’s lifespan. I have also been told that when this is done, the poor rats are miserable and, naturally, I would never recommend trying any such thing.

Laurel Summerfield, Burke, VA
Q I’m a dog trainer with some pet rats. I have a question on the best food to give my rats. I got rodent chow from the feed store — I understand that is the healthiest diet, but they don’t like it all that much. How much other stuff should I give them? I love giving them other stuff, but I don’t want them to ignore the rodent chow. Besides the rodent chow, they currently get peanuts in the shell, sunflower seeds, dried corn on the 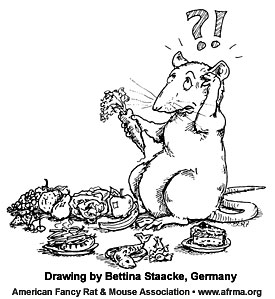 cob, various fruits and vegetables, and bread. I get the feeling they would eat fresh corn better than the dried.

A Some types of rodent chow seem to taste better than others. One of the best is the “Wayne’s” formula (8604) by Harlan Teklad. The rats just love the stuff. Unfortunately, you won’t find it in a pet shop . . . it’s a laboratory grade lab block.

Think of your rat’s diet as similar to your dogs. General rule of thumb is that the rodent chow should make up 95% of their diet with the other 5% made up of healthy treats. I have found that the fewer treats I give, the lower the incidence of tumors and other problems.

Some of the absolute worst things you can give rats are high protein/high fat foods. The major culprits in this category are sunflower seeds, peanuts, and dog food. Cut ALL of these items out of your rat’s diet . . . they lead to obesity and tumors. If you give treats, give fresh fruits and vegetables and whole wheat bread. Those are typically best. There has been some evidence that corn can be a major contributor to tumors so I avoid it as well.