This article is from the Nov./Dec. 1996 AFRMA Rat & Mouse Tales news-magazine.

Q I have two mice (in separate cages). One is small (30 g) The other is 42 g. Could you tell me if I have an English mouse and the difference? Or if the breeder mixed it with something else? Leo P. Murphy

A English mice ususally average 60 to 80 grams or more per mouse. Also, they look different than the pet shop American mice. They have larger ears, sleeker coats, longer tails, and longer, racier bodies. Not very many of us breed purebred English stock. We recommend to those interested in getting the type and size improved on the Americans, to crossbreed them with a purebred English. You would have to ask the breeder of your mice if they have English stock, or have bought any to outcross with the American. The only ones breeding purebred English mice that we know of are here in Southern California, Northern California, the East Coast, and Washington. English mice have been shipped to a couple of other states, but I don’t know if they still have the mice and are maintaining pure lines.

Q What kind of disinfection can I use for cleaning cages? I thought I wasn’t allowed to use any. Megan Hill, Quebec, Canada

A Most disinfection products meant for human use should not be used for your animals. There are a number of disinfectants that are okay to use with rats and mice. A 10% solution of bleach in a squirt bottle is an excellent disinfectant. The only problem with it, you have to be very careful to rinse the cages thoroughly (until they do not smell like bleach). This is very inexpensive and does a great job.

Many Southern California breeders use a product called Parvosol. You mix a small amount of this product in a spray bottle with water. It is sprayed on the cage, let set for a minute, then wiped off with a paper towel. Parvosol is a kennel cleaner, and can only be purchased in huge quantities. AFRMA buys it and repackages it for sale to members at a very reasonable cost. Look in the upcoming sales catalog for details. [Update: Nolvasan and Roccal-D are also safe products to use.] 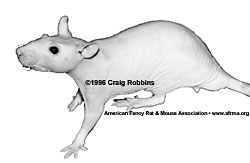 Q Is there anything I should know about caring for Hairless rats? Somewhere I remember reading something about eyedrops. Marion Banfield, Novia Scotia, Canada

A For the most part, Hairless rats can be kept just like you would any other rat. The one exception is that they get cold much easier than the normal rat, and this can lead to them getting sick. Make sure that her cage is not in a draft, and that she has a nice warm nest to sleep in. Many people like to house their Hairless rats with haired rats so they can snuggle up to get warm. There should be no need to give your Hairless rat eyedrops unless there is something specifically wrong with her eyes.

Q Our secretary took one of the baby Donryu rats (lab rat strain) home as a pet for her son. The rat was born in late March; they have had it since it was about 12 weeks old. “Rattigan” has been an excellent, gentle pet until about 2 weeks ago when it started biting. Now, almost every time someone tries to pick him up, he either bites or tries to bite. I have never had a problem like this with any of the Donryu rats; even the ones that have never been handled are gentle. Any suggestions? The rat recently bit and scratched Charlene’s son . . . it required stitches. Michelle Cooper, San Diego, CA

A My guess is hormones and he needs to be neutered. Around 4–6 months of age is when the male hormones seem to kick in and that’s when the males will seem to fight more and become more aggressive towards other males. I had a male I got from someone else and when he was 4 months, he became “aggressive” when he smelled another male rat. One lady was holding him (he was 4 months old) and he bit her. Later she realized she had earlier held another male on her lap. The next week he saw the vet. After that he was fine. The other times I’ve heard of male rats “changing” and biting have been when another male was handled prior to picking up the rat in question, or in one instance after the rat was used for breeding, his personality changed (this one didn’t bite like the others though).

If these people don’t have any other rats, then who knows what is going on. I would suggest a trip to the vet, as a rat biting people and it requiring stitches is very serious. I believe any rat that bites should be either neutered (if a male) or put down. You can never trust them after they do damage like what happened in your secretary’s case. It cost me $40 to neuter my rat. Other people who have had their rats neutered have also paid around $40. If these people can’t afford this, then I would suggest euthanizing the rat and getting a new one.

Q Can you tell me if mice are color blind or have color vision? My daughter needs this information for a report at school and, so far, we haven’t been able to find information on this.

A We’ve heard reports either way so aren’t really sure which is correct. The only thing we can suggest is to check out the library, local university, and the Internet and see if they have any current information.