This article is from the WSSF 2013 AFRMA Rat & Mouse Tales news-magazine. 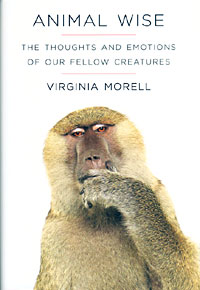 Instead of a book review of the entire book, I’m going to just focus on Chapter 5, The Laughter of Rats. This chapter is about Dr. Jaak Panksepp a neuroscientist at Washington State University in Pullman, WA, and his work studying rats at play and his discovery of their laughter by using a bat detector to hear the sounds.

His work on play experiments began in the early 1980s to find out how emotion and reason meet. Early on in his studies he discovered rats innate wariness of cats even though they hadn’t met a feline in their nearly 150 years of domestication. Because of this, the researchers and visitors wear cat-free clothing when working with the rats. I’ve had rats in the house with my cats for many years and I’ve seen this same reaction in some rats but others show no fear and will actually want to be friends with some cats. The cats I had, had no interest in the rats and one would get up and leave the couch if a rat was out and wanted to come say Hi.

Panskepp’s experiments trying to understand the function of play were done using young Long-Evans rats (known for their more genetic variation) at 4–5 weeks of age when they most enjoy playing. They were housed individually and each day pairs were placed together for a play-date. Some rats were never allowed to play and would just sleep all the time since they had nothing to do. Some researchers argue that play serves no purpose where others say it is necessary for survival skills. Panskepp says it does more and helps construct the social brain. He has mapped 7 fundamental emotional systems in the subcortex—FEAR, RAGE, LUST, CARE, PANIC/GRIEF, PLAY, and SEEKING. These are specific systems in the brain and not just sensations.

A rat that wants to play will put his feet on the other rat’s back as play solicitation. Tumbling, wrestling, chasing, nipping, pinning the other rat, bunny-hopping, and short squeaks are all part of play, where boxing, puffing up, biting and drawing blood, and loud squeals are all signs of fighting. If the play progresses to fighting, then the one being hurt stops playing. (Anyone that has had baby rats has enjoyed watching them play, and owners can become part of the play by grabbing and poking gently at their sides like another rat would and tousling with them. In a matter of seconds you have the whole cage wrestling and tumbling with your hand and each other. The babies will nip at your hands but that is just part of the play and shows they want to keep playing.) Even though one rat wins the majority of the pinning matches, the winner will let the other rat pin it down to keep the play fun. They will also make loud audible chirps that is a call for more play. During play the rats will make inaudible chirps that resemble laughter, or more closely giggling; they also made this sound in anticipation of play. To hear this, one needs a bat detector that converts high-frequency signals (rats are at 50 kilohertz) into a lower frequency sound that we can hear (2–4 kilohertz). It took 5 years of study of play chirps for Panksepp to equate them to human laughter.

Panksepp’s work also included breeding happy rats (those that played and made the play chirps) and depressed rats (weren’t very playful and rarely made play-chirps) in his study to track down the genes for joy. Progeny from the happy rats were quick to play with the human hand and emit play-chirps when they were turned upside down and tickled on their belly. The rats that love to be tickled the most were those that were just weaned and isolated for at least one day—they were then so hungry for play that their ultrasonic chirps were more than double of other rats.

This deep desire to play and laugh are important for optimal social growth. It also helps assemble the brain where it releases proteins that cause neurons to sprout and grow. Rats that play with each other and with toys grow more neural connections than those kept alone.

In Panskepp’s pilot tests, he found mature female rats seem to prefer play-experienced males when given the choice for a mate.

In the experiments the researchers had done, they found that rats prefer to be tickled rather than just petted, even to the point of running a complex maze to get tickled. They found that play is a primitive process and is deeply embedded in the brains of rats. Rats that have played may be better able to handle stress and fear and may be protected against depression.

The chapter also goes into metacognition, dreaming, personalities (which we all know rats have), altruistic behavior, as well as Panskepp’s previous studies of PANIC (separation distress calls) and anger (RAGE).

Note: Other chapters are on ants, fish, birds, parrots, elephants, dolphins, the chimpanzee, and dogs and wolves.