This article is from the Spring 2002 AFRMA Rat & Mouse Tales news-magazine. 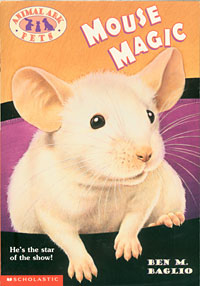 Nine-year-old Mandy Hope and her best friend James are excited about the parts they have in their school play “The Wizard of Welford.” The students wrote the play, which tells the tale of a wizard who comes to the small English village of Welford. When town menace Horrible Horace threatens to turn all the towns’ people’s animals into stone, the wizard must use magic to save the day. But alas, Horace steals the wizard’s wand leaving him powerless!

At the local magic shop Mandy and James are introduced to the Spectacular Spellini, a professional magician, who recently moved to Welford. After learning that James is to be the wizard in the play, Spellini teaches him some magic tricks to use in his performance.

Most of the students and their animals have parts in the play, except Amy Fenton and her white mouse Minnie. “It would be difficult to think of a part for a white mouse,” proclaimed Mrs. Gavie the school principal.

While trying to come up with a surprise ending for the play, Mandy and James think of a way to include Minnie. They come up with a clever plan to make the pet mouse a star.

Mouse Magic will appeal to elementary school age children who are intrigued by magic, or have a love for animals. Kids may even be inspired to put on a play of their own after reading this book. Mouse Magic is number five from the Animal Ark Pet series, which includes Puppy Puzzle, Kitten Crowd, Rabbit Race, and Hamster Hotel.