This article is from the Winter 2003 AFRMA Rat & Mouse Tales news-magazine.

She Was Nice To Mice 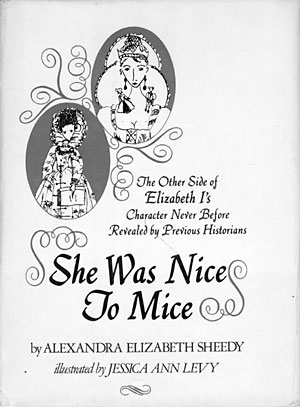 She Was Nice To Mice is not a new book, in fact it was written in 1975, some 27 years ago. I came across the book once before in a thrift store a few years ago and thumbed through it, but never actually sat down and read it, until now. What grabbed my attention about this book was that it was written by a 12-year-old girl with a flair for telling a story and a maturity beyond her years—Alexandra Elizabeth Sheedy.

In She Was Nice To Mice, the “she” in the title refers to Queen Elizabeth I, and “Mice” refers to the little social climbing rodents who reside in the Queen’s palace during her reign over England from 1558 to 1603. Sheedy’s extensive research into the Elizabethan period led to the writing of the book, but it’s not mentioned why she chose a mouse as her vehicle for narrating the story.

The story begins when Esther Long Whiskers Gray Hair Wallgate the 42nd inherits a memoir, a very old and fragile book, written by a mouse relative who resided at the court of Queen Elizabeth I. Since Esther’s goal in life is to be a mouse of royalty, her interest is sparked. “I have a literary mind” shares Esther, wishing to impress her mice friends with her ability to read. And so she begins to read the memoirs of other royal relatives.

The royal mouse and her trusted friend Skidmore become friends with the Queen, who has a soft spot in her heart for mice, though she could be quite stern with her human subjects. Fondly, the mice refer to Elizabeth as the Beautiful Nest-Supplier, which is what they called her after they began using her flaming red hair for decorating their nests. Dedicated to watching Elizabeth’s every move, the mouse writes, “We often observed Queen in public and she was very different from the person we knew privately.”

Life at the palace was a continuous stream of banquets and parties, which the mice loved because of the bountiful food and entertainment. The mouse especially loved when Shakespeare would perform his plays there. She humorously recalled how once while the audience of lords and ladies were watching Shakespeare act out his latest tragedy, a dozen of the court mice started to tear the pages of his play to shreds and eat them. Fearing that the evening would be ruined by the mischievous rodents’ behavior, the mouse immediately alerts the Queen to the problem. Rising, Elizabeth commands “STOP THOSE MONSTERS” causing the mice to scurry for cover.

The Queen’s complicated relationship with her favorite gentleman friend, the Earl of Essex, turns into a soap opera when Essex develops a fondness for her lovely young niece, causing Elizabeth to become extremely jealous. Of course the mouse never misses a moment of the drama. The continuing saga of Elizabeth and Essex finally ends when Essex tries to overthrow the Queen, causing her to have him tried for treason and beheaded. The royal mouse stays with her Queen until Elizabeth’s death in 1603, upon which the memoir ends.

With the revelation that she truly is related to a mouse of royalty, Ester Long Whiskers Gray Hair Wallgate packs up her belongings and promptly moves to Buckingham Palace, which is now occupied by Queen Elizabeth II. Thinking this to be a fateful coincidence, Esther is ready to continue her legacy.

As an adolescent, Ms. Sheedy had some of her other works published by the Village Voice, MS, and Seventeen magazine. Putting aside her writing career she went on to become Brat Pack actress Ally Sheedy, making her film debut in the suspense thriller “War Games” and the popular teen movie “Breakfast Club,” back in the early 1980s. Some of her other film credits include “Twice in a Lifetime,” “Only the Lonely,” “Short Circuit,” and “I’ll Take You There.”