This article is from the Fall 2003 AFRMA Rat & Mouse Tales news-magazine.

Pet Owner’s Guide to the Rat 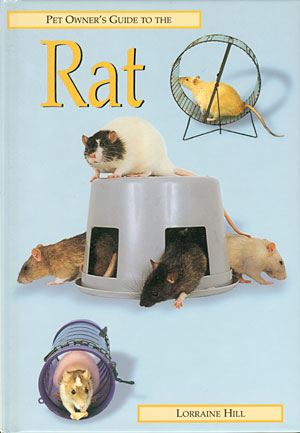 Pet Owner’s Guide to the Rat is aimed at novice pet rat owners interested in learning about general rodent care, rat shows, and about the different colors and varieties of rats, from a British point of view.

Author Lorraine Hill, a well-known writer on small animals, knows how rewarding a relationship with pet rats can be, as she’s been a rat fancier for many years and is considered a rat care expert. “Rats are highly intelligent and this is what sets them apart from the many other pet rodents. The more attention paid to the rat, the more rewarding the relationship with your pet will be,” declares Ms. Hill. She has exhibited rats at shows of the National Rat Fancy Society of the United Kingdom and has bred a number of varieties of rats.

In Pet Owner’s Guide to the Rat, Ms. Hill introduces us to rats with a run-down on the history of Rattus rattus, Rattus norvegicus, and today’s domesticated rat. The Rat Fancy, which began in the late 1800s, is also discussed. The author explains how the Rat Fancy has helped to promote the domesticated rat as a pet, to dispel myths surrounding the rat, and to educate rat owners about their care.

In the chapter on colors and coat types, we’re told that over the years many color mutations occurred. Appearing in 1810, Albino was the first color mutation of the domestic rat followed by Black, Silver Fawn debuted in 1910, Cinnamon in 1925, Mink in 1910, with Siamese and Himalayan appearing in the 1970s. “The Hairless rat is self-explanatory and not a variety which will appeal to all.” shares the author. Hairlessness didn’t appeal to Ms. Hill either, as she has no photos of Hairless rats anywhere in her book.

A chapter on British Rat Shows covers standards, classes, preparing for shows, and rat clubs. Judging procedures are discussed in detail, giving us a good idea of what goes on at rat shows in the United Kingdom.

Unfortunately, the author loses momentum when she gets to the subject of rat health care. General ailments such as allergies, abscesses, tumors, wounds, tooth problems, and respiratory problems are touched upon. The author explains that rats are susceptible to respiratory illness; however, the word mycoplasma is never mentioned. Since this is a book for novice rat owners, Ms. Hill keeps her explanations simple and advises readers to visit their veterinarian when certain symptoms are observed.