This article is from the WSSF 2010 AFRMA Rat & Mouse Tales news-magazine.


If you are looking for a couple of hours of entertainment, this is not the book. It is a difficult and depressing read. It is a well researched and written book that will find appeal with the medical and psychology student as well as the intellectual with a bent toward the macabre. A major theme is how man and rat are so interrelated. Not just in proximity, but in character and personality—the dark side only. 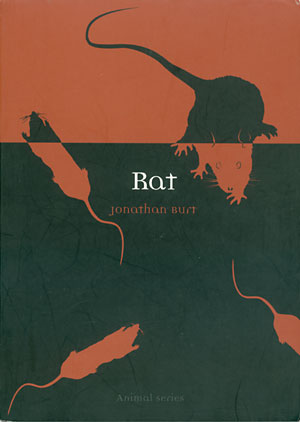 There is only so much that can be said about the rat and its role during times of plague, but this book seems to have found more. The book goes into more detail and has far more documentation than I have ever read in any other publication on rats. It did tell, however, of the Ogata experiment in 1897 whereby injecting healthy mice with the crushed fleas from dead rats infected the mice.

The book then tells of rats and how they were involved in world religions, myths, Chinese horoscope, art, literature, and superstition. Again, there is nothing positive. However, they do have their own patron saint, St. Gertrude. There is quite a bit of illustration throughout this part of the book, still it is neither positive nor attractive. From here it tells of the rat in literature and how the rat was used as an instrument of torture by various writers.

We now go to rats used in science as far back as 1621. Yes, we do owe the rat a debt of gratitude, but as people who love rats, we do not find it amusing to read about it.

The next chapter is again on Plague and Pollution. Need I say more? With the next chapter on Pets, Vermin, and Food. Although this chapter gives six positive pages to the rat fancy and how it started, IT STOPS THERE. The rest is of traps and ways of killing them and how they are used as food by humans. It then gives a time line of the rat.

The last piece of literature is found in the Appendix of the book and is called A legend of the Inquisition. Fifty verses of gut wrenching visuals I wish I had not read. This is not a publication for the average person that loves our ratties.