This article is from the April 1984 AFRMA Rat & Mouse Tales news-magazine. 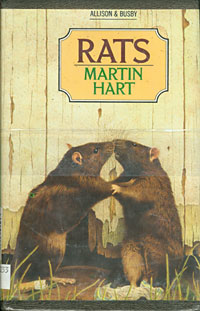 Whenever I hear of another book on rats I immediately try to get hold of it, either at the University library, or by ordering it through the publisher. Most are fascinating, to this rat fancier, some tripping me on their use of graphs and other scientific tools, sometimes contradicting each other, sometimes maudlin in their cuteness. In this book I have found a book that is so exciting I must recommend it to everyone in this “fancy.”

Written by a respected ethologist, whose work has always involved working with rats, the surprise comes for the lay reader in the love and respect given the rat by this work. Feelings as well as knowledge from a lifetime involvement are shared with the reader.

All aspects of the rat, from breeding, biological classifications, rats as pets, in the laboratory, population dynamics, their impacts on human society, and human societies impact on them, are given in a style which flows like a novel rather than a scientific reference. Upon finishing the book, you are surprised at the amount of scientific data you have picked up with such ease.

Mr. Hart’s excitement is very contagious as he shares his information about the rat. His presentation of man and rats relationship is portrayed in a much more realistic manner than “man vrs. pest” as is often done. In this book it is two species meeting, each bearing their responsibility for their impact upon each other.

The concept of “rat kings” (the mystery of the rat packs with knotted tails) is introduced and traced in this book and for this reason alone this book is worth getting hold of. To “rat fanciers,” however, the real heart of this book is the discovery that a scientist, a rat ethologist, speaks for 172 pages with such excitement, affection and respect for the rat based on his lifetime of studying them. This is a book to be cherished by any rat fancier. Let us hope for a sequel some day.