This article is from the Summer 2003 AFRMA Rat & Mouse Tales news-magazine.

The Story of Rats: Their Impact On Us, And Our Impact on Them 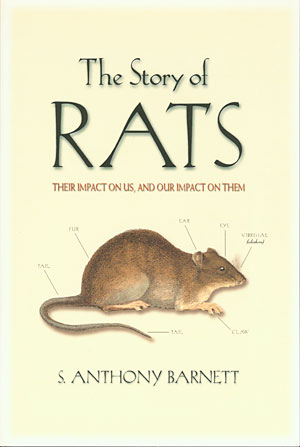 S. Anthony Barnett gives us a social history of human relationships with rats and explores the concept that society can learn about humans by comparing people to rats in his latest book The Story of Rats: Their Impact On Us, And Our Impact On Them.

To fill us in on the author’s background we are told that, “Early in the Second World War, equipped only with first class honors from Oxford University, Tony Barnett was drafted, not into the trenches . . . but into the sewers, wharves, food stores, and other rat infested environments offered by a London bombed nightly by the Luftwaffe. Thus began his interest in rats and his academic career in Scotland, India, Australia, and North America. He is now Emeritus Professor of Zoology in the Australian National University.”

Barnett writes the book through the eyes of a scientist/ researcher. Though he studied rats and their impact on people for over 50 years and is definitely intrigued by them, his relationship with them is strictly business. He has no “heart warming” stories to share about his countless interactions with Norway rats during his many years as a researcher. The best he can do is to tell us that, “even wild Norways can be tamed and made to relax while handled. To achieve this, one merely plays with them regularly from an early age. They can then become agreeable pets.” One anecdote he did share was how during the Second World War, a colleague of his produced rat leather, made from wild Rattus norvegicus trapped for research, and gave him some. Though thin, it made useful elbow patches for his sweater.

During the 1940s, Barnett contracted leptospirosis or “Weil’s” disease after being scratched by a wild Norway rat that he’d gotten from a rubbish dump. He developed a high fever, profuse sweats, and turned yellow with jaundice. After being treated with penicillin and then recovering, he was told that Weil’s disease has a 30% mortality rate. Perhaps that experience contributed to his attitude toward rats.

The first part of the professor’s book titled “Histories” covers what people from ancient times and cultures have felt, believed and written about rats. Using quotes from biblical passages, ancient Indian scriptures, letters from an early American farmer, old Zoology text books, etc., Barnett illustrates that wild rats tended to be portrayed as, “portents of evil,” in most cases. “Our relationships with rats reflects human cultural diversity,” says the author. “Human attitudes to rats depend on custom and circumstances: they include terror at the threats they represent to our food and health, and welcome as a source of nourishment, and they range from disgust to curiosity.” Barnett then covers diseases that can be carried by Norway rats, but clarifies that the diseases usually move among animal species without touching humans. In an in-depth section on Bubonic plague, a.k.a. “The Black Death” the author shows how rats impacted human society on a large scale when they became host to the fleas which carried the dreaded disease. We are told that “Bubonic Plague is a story of public health, but also of culture and economic history and superstition.”

In another chapter, the differences between Rattus rattus and Rattus norvegicus are explained and we learn that during the nineteenth century, Norways became domesticated in a large scale and produced the various forms of lab rats. The differences between wild and domestic rats are also pointed out. In Part II, titled “Questions And Answers,” Barnett explores topics such as “Do Rats think?,” “Do Rats Get Bored?,” “Are People Ever Like Rats?,” and “Rat Societies.” He states, “If we wish to understand animals, or to prevent them from infecting us or stealing our food, we need to know them as they really are, not to describe them as though they are either human or possessors of magical powers. When we achieve a true account, we can sometimes also use our findings to suggest what to look for in ourselves.”

In the first part of the book we’re told “Rats appear principally as enemies; but in Part II we learn that during the twentieth century, experimenters have turned them into collaborators. Experimenters on rats abilities often hoped to reveal, in the long run, something about the complexities of human intelligence.” Barnett dismisses the idea that rats are “diabolically clever,” but shares, “even domestic rats display a notable range of abilities.”

The last three chapters in Part III, “The Blindness Of Research,” deals with fluctuations in rat populations and rat mortality due to social stresses. Barnett tells an interesting story about what happened to rats in Chernobyl, Russia, after the nuclear accident. He says that most animal populations that lived in the surrounding area were thriving 10 years after the accident, except for rats. The rat population dwindled since they were so connected with the human population, which no longer lived in the area, and had provided the rats with food and shelter. He also explains why rats avoid newly introduced foods and how they choose the right supplements when they’re deficient in a nutrient.

It’s rather difficult to pigeon hole this book, as it’s a hodge-podge of information; containing facts, stories, photos, drawings, and science experiments dealing with rats. The book is full of interesting information, and those venturing into it will learn many new things concerning rats. Unfortunately, the author’s attitude about rats could make a rat aficionado’s hair stand on end! In all his research, Barnett never discovered the uniqueness rats have which rat fanciers hold dear.