This article is from the Fall 2000 AFRMA Rat & Mouse Tales news-magazine.

A Glance Back in Time: Wealth in Rats and Mice 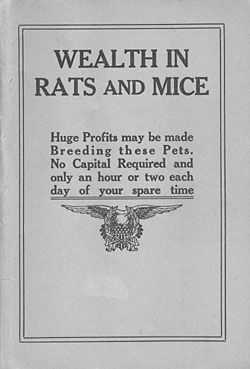 For years I have collected old books about the subjects I love. I’ve always been fascinated by the history behind how things are today, and a great way to learn about history is to read what was written back when the events were actually taking place.

I’ve always thought it very unfortunate that we do not have any clear record of the history of domestic rats and mice in the United States. England is far ahead of us in this matter, partially aided by the ongoing presence of an active rat and mouse fancy. What history we do have is tiny vignettes out of time seen though the eyes of period writers. While old references to rats and mice are rare, they do exist. I have always found them extremely interesting and thought others might as well. In this series of articles, I’ll share some of the pieces I have found. If anyone has happened across other references, I’d love to hear about them as well.

When I encountered the title of this booklet I just had to own it. The mere concept of there being much “wealth” involved in rats and mice (beyond the enjoyment of their companionship) brought a smile to my face.

Published in 1921, this booklet is clearly a sales pitch for something of a get-rich-quick scheme. At that point in time laboratories depended on individuals to supply them with the rats and mice they needed. This booklet, put out by the Laboratory Supply Company, is aimed at encouraging individuals to breed rats and mice for this purpose.

While this may not be our goal today with our own animals, it is very interesting to look back on this and see what individuals were doing back before the fancy existed in this country. Apparently the deal was that you could purchase a “hutch” complete with bedding, four females, and one male rat or mouse for less than $10. Their sales pitch goes on to suggest that in 1 year, 10 mice (or rats) would earn $250, 100 would earn $2,500, 500 would earn $12,500, and 1000 would earn $25,000.

Interestingly, this company appears to have been a major supplier of rodents to the laboratories and from reading this booklet, they were having a difficult time filling orders due to a shortage of breeders. They actually offer a 3-year contract in which you buy the breeding stock from them and they will buy all the resulting offspring back at up to 60 cents a pair. They go so far as to suggest you should, “Make those Liberty Bonds earn 200 to 500% interest instead of only 3% to 4% %—Exchange them for white mice.”

While this company did apparently put out a book on the subject of rat and mouse care (a book I’d love to find) they also included quite a bit of care information in this booklet as well. We have reprinted here a couple of pages that folks may find of interest. Keep in mind, this was long before lab blocks and packaged bedding existed. I found it particularly fascinating that they mention the Windsor institute (which is incorrect, it is actually the Wistar institute, the subject of my next article).

Throughout this booklet I’m happy to say there is continuous mention of what nice animals both rats and mice are. They boldly state that they are harmless, very intelligent, and perhaps better pets than dogs and cats. It’s nice to see the company appreciated the rats and mice for more than just their value as laboratory animals. They do, however, stress their importance in the laboratories in saving human lives. Having no knowledge of such things, I do not know how much of what they write on this topic is hype, and how much is truth. It’s interesting though.

While this booklet was never aimed at the pet owner or the fancier, it does show a bit of history on how rats and mice were raised and cared for at the time it was written. At that time in history it does seem the focus of the folks raising rats and mice was the goal of selling them to the laboratories. I can add just a touch of additional information to this however. At one of our displays some years ago we were approached by an elderly lady with her young granddaughter in tow. This lady was particularly excited to see our display (which was among a group that included tigers, lions, and an elephant). While standing at our booth she told her granddaughter all about how her father had raised white mice for laboratories to pick up some extra money when she was a young girl. She also remembered that her father had allowed her a cage and some colored mice for a project of her own. She bred the mice to make as many colors and combinations as she could and sold them as pets to pick up some spending money. She even went so far as to ask if we had any spotted mice or Agoutis with us. Though her childhood probably was not as early as this particular booklet, it is certainly possible that her father was breeding for this or a similar company. Though the focus was clearly to bring in some extra funds with the mice, I was delighted to hear that there were folks out there breeding the colored mice and specifically selling them as pets. This elderly lady was clearly very fond of her mice, and I was thrilled to see her sharing that with her granddaughter.