This article is from the Summer II 1998 AFRMA Rat & Mouse Tales news-magazine.

From our files
QI have a question regarding the female rat’s cycle. When they are in heat, every four days or so, would it be evident by spotting on their bedding? I put soft cloths in their sleeping corner (rather than shavings) which I change daily. Occasionally, I’ve noticed what appear to be reddish stains, which I associated with their sneezing. Perhaps I’ve misdiagnosed their symptoms. I hate to think I might be giving them antibiotics needlessly. If that’s what it is, how do you tell when a female is in heat?

ANo, if a rat is in heat you will not see any spotting on their bedding and there is no discharge. In all likeliness the reddish stains are either dried urine (which sometimes takes on a reddish or brownish cast) or staining from their eyes or nose.

When a female rat comes into heat, you can tell by a definite change in her behavior. Usually she will become very hyper and squeak when you pick her up. If you touch her rear end, she will freeze, elevate her rear and tail, and vibrate her ears.

There are some females who either never show a change in behavior, or only show a slight one. Because of this, it is not a good idea to use that as a test to see if it is “safe” to let your boys and girls play together.

From Chris Weikal, Kalispell, Montana
QI raise standard Blue Hooded rats. I have had some problems with the females not being able to nurse their young. I was wondering if you knew of any other Blue breeders, and if they are having the same problem?

In reading the newsletters we get from the National Fancy Rat Society in England, it appears that they do have problems similar to these in their rats. Fortunately, whatever problems we have do not appear to be widespread.

There are quite a number of people who breed Blue rats, and the offshoots like Blue Point Siamese, Blue Agouti, Silver, and Platinum. The majority do not seem to have these types of problems any more frequently than the other colors do.

On occasion, however, we do hear of someone who consistently has problems. Because of their popularity, more people breed Blues than other colors, so if we hear of these problems a little more often in Blues, it is most likely due to the fact that there are more litters of them being bred. 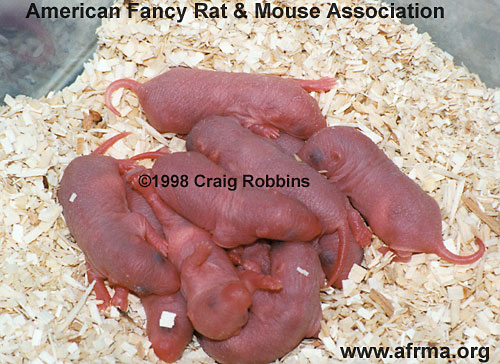 Without extensive testing, our best guess is that it is not the color that causes the problem. Instead, it appears to be something inherent within certain lines (or families) of rats. It is being passed down with each breeding.

The first step to solving this problem is to eliminate any husbandry related sources for your problem. Are your rats kept clean and do they have the proper kind of non-toxic bedding (no cedar or pine)? Do they have adequate nutritional food and is it available in large enough amounts? Do they always have fresh water available? Are they being kept at too high or too low a temperature? Are they ill in any way? Any of these can contribute to or cause the kinds of problems you mention.

If these have all been eliminated as possible causes to your problem, it is reasonable to assume that your rats have a genetically based problem. The best way to eliminate it would be to acquire some rats from a line which is known for NOT having these problems. Breed your rats into that line, then breed the resulting babies together. If any rats have difficulty nursing their young, do not use them for future breeding, or keep any of their offspring as part of your breeding program. It may take a while, but eventually you should be able to rid your rattery of the problem.