This article is from the Fall 1998 AFRMA Rat & Mouse Tales news-magazine.

Demetri Psihopaidas, Elk Grove, CA
QI’ve been trying to breed my mice for about a week, and I have seen no teats appear to pronounce on the female. Also, I have waited for 3 weeks and she has not given birth. How much do the teats pronounce . . . like are they unmistakably visible? Or are they hard to see? Also, I would like to know if there is a possibility of an early or late delivery. And lastly, I would like to know what the odds are of the mother dying while giving birth or needing a cesarean. 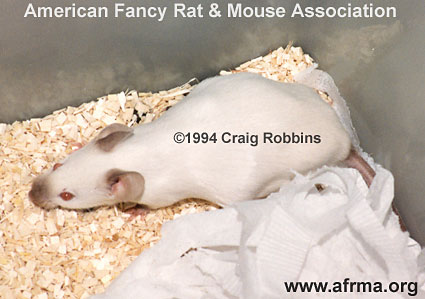 AWhen breeding mice, it is influenced by the age of the animals, environmental conditions, type of food, type of bedding, weather/temperature, etc. Sometimes you have to leave the animals together until the female starts to get big, which may be more than a week. When I breed my females, I will keep them with the male until they “start to show” as I usually don’t actually see them breed. Once in a while you will run across a sterile male or a female that won’t get pregnant. The way to tell if it is the male or female with the problem, is to put a proven female with your questionable male and vice versa. You will see her getting bigger rather than seeing the teats since they are so small. If your female is 10 months or older, she is too old. Many people have found that a lot of times during the summer their mice won’t breed. The ideal temperature your mice should be housed in is 65°–75°. My mice are kept at 65°–70° which means a heater in the winter, and an air conditioner in the summer. A mouse’s gestation period is 17–21 days. My mice usually go 19–21 days with their gestation. I have found it extremely rare to have a mouse die trying to give birth. If a mouse needed a c-section, you would have to find a qualified veterinarian that would be able to do microscopic surgery on such a small animal.