This article is from the Spring 1998 AFRMA Rat & Mouse Tales news-magazine.

Evelyn Founders
QI am the very happy owner of four pet rats and recently joined AFRMA. I am thrilled with the newsletter and found all the information you sent to me very informative and interesting.

I was particularly intrigued by the standards book you sent me. I had no idea there were so many various colors and markings, most of which I have never seen.

It did bring to mind a rather worrisome question however. How difficult is it to get a “show quality” rat? I mean, how on earth do you manage to do it without a massive breeding program?

My only experience breeding rats is with Hoodeds. I used to live next door to a person who bred rats for the pet shop industry in their garage. I used to go over and look at them on a regular basis and “saved” quite a few. They were all Hooded rats.

I noticed that the standard for Hoodeds says that they should have an even, solid stripe running all the way down their back. In the 10 years I lived next to this commercial breeder, I can only remember one or two rats fitting this description—out of thousands.

How on earth would a responsible breeder be able to compete in shows? 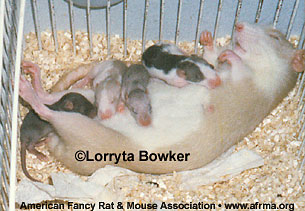 ADepending on the color/marking/variety chosen to work with, responsible breeders do very well. From what I’ve seen, the average fancier that participates in AFRMA shows has between 10 and 20 rats or mice. The large scale breeders seem to be the exception rather than the rule, and the smaller breeders seem to do a disproportionate amount of winning.

The way to breeding showable rats and mice is quality rather than quantity. Responsible breeders take the time to learn all about the basics of rat and mouse genetics well before they breed their first litter. They learn what combinations will produce the colors/ markings that they want, so they can plan their breedings and don’t have to rely on trial and error. They also are familiar with the basic principles of breeding together two rats who have the same faults.

One of the most important key characteristics of all the responsible, successful breeders I know of is that they work with very specific varieties. They do not have a huge number of different “projects” that they are working on, instead choosing one or two specific colors/markings to work with. They set a goal, and do every breeding with the object of improving on the parents. Even the success of breeders who have large numbers of animals work with a select few varieties. Most people who are breeding for show have the advantage of being able to purchase their original breeding animals from other breeders. Naturally, these rats have many fewer faults then the “random bred” rats found in pet shops. They also have the advantage of a known background so that there are many fewer “surprises” and results of a breeding are much simpler to predict.

There are some varieties that are much more difficult to work with than others, but even they don’t need massive breeding. They just take longer to get right.

Take, for instance, Hooded rats. My Hooded rat, Max, is probably the best rat I will ever own. He has a wonderful temperament, beautiful type, clear, straight markings, and is very healthy. He has also gone Best In Show five times. Because of his quality I have bred him more times than I have ever bred any other rat—a total of four times.

He was bred to three different females owned by two different people. His offspring were all better than their mothers, though not as good as Max. I kept one son and he has been bred twice, to two females who are owned by two different people. Both females complimented his good points and excelled where he has faults. His offspring are a great improvement on him and their mothers. From here I will probably do one or two breedings a year to continue the line.

Keep in mind that with every responsible breeder I know of, there are two givens: any rat they breed has a nice temperament plus good health—no exceptions.

The color/markings come last. Because of this, breeding show quality rats is even more difficult than just breeding nice pets. It is this difficulty and precision that true fanciers enjoy. Nichole Royer

Katie Morrison, Scottsville NY
QI have two rats and they are both Siamese. The female just had a litter of babies.

I was wondering if the male (if placed in the same cage) will attempt to harm, or even eat the babies, as it is for hamsters and mice. By the way, my male isn’t in the 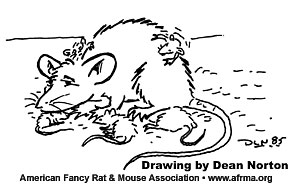 same cage, he has his own.

AMale rats, if in the cage when the babies are born, will help take care of them. It would not be a good idea to put him in now though, mom-rat wouldn’t like it. The problem with having the male in the cage is that mom-rat can become pregnant about 4 hours after giving birth and have more babies 3 weeks later. Geri Hauser