This article is from the Winter 1999 AFRMA Rat & Mouse Tales news-magazine.

Barbara Reed, Greenbrier, TN
QI have heard that a solid white mouse with black eyes was unheard of. Is this true? I have a beautiful solid white mouse all the way from the tip of its nose to the end of its tail and with solid black eyes. It is a very beautiful snow-white, and I am very proud of it! The photo I sent you doesn’t do the mouse justice! His name is Whiskers cause he has big beautiful white whiskers like I’ve never seen on a mouse before! He is the sweetest, calmest most docile mouse I have ever produced. Also, I must mention that there was no inbreeding to achieve this little guy! He is genetically stable and personally sound. 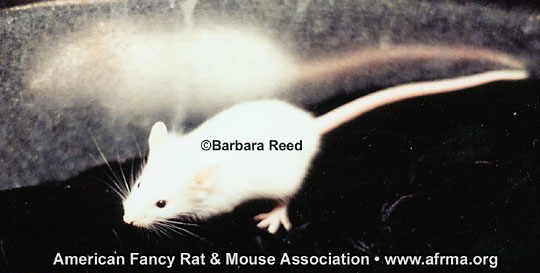 ABlack-eyed white mice are very pretty and though they are not particularly common, they are not rare or unheard of either.

There are three ways Black-Eyed White mice are usually produced (there are more but these are the most frequent). By far the most common is the combination of Fawn (Ay) with extreme chinchilla dilution more commonly known as Beige (ce). When Beige is combined with any of the “orange” colors, the orange is diluted to white. This is precisely why you will never see a Beige Tan mouse . . . the tan belly color is always diluted to white producing a Beige Fox.

The easiest way to create BEW mice is to obtain both a Fawn and a Beige mouse. Breed them together and keep the typiest fawn colored offspring. Breed together or back to their Beige parent; they will produce a few BEW youngsters.

There is one problem with producing BEW mice in this fashion. Like all Fawn (Ay) mice, BEW mice produced this way will almost always have a weight problem. This can range from a little portliness to extreme obesity. Unfortunately, this not only interferes with the look of the mouse, but affects fertility. Often female BEWs must be bred young or they will never become pregnant.

As an interesting side note, BEW has spectacular results when combined with the Brindle gene. When you combine Brindle and Beige, the orange background color is diluted to white but the dark stripes are unaffected. The resulting mice are white with black eyes and black stripes like white tigers. Some people refer to them as Silver Brindles.

The other two ways of producing BEW mice involve Spotting genes. Recessive spotted mice (ss) typically have large clear patches of color and are usually referred to as Even Marked or Broken Marked mice. Dominant spotted mice (Ww) are Variegated, and have small ragged spots that usually concentrate near the mouse’s head and rump. In both cases, simple selection can create BEW babies. If you choose mice with the least amount of color on them and breed them together, you will eventually produce Black-Eyed Whites. This may take several generations; however, you avoid the problems encountered when dealing with Fawns.

Dominant spotted mice can also produce BEWs in another way. When you breed two variegated mice together (Ww), you will end up with one-quarter of the litter being (WW). Unfortunately, most WW mice are born with a fatal anemia and die within a few days. On occasion though you get one that doesn’t, and when the hair comes in, you will discover that it is a BEW.

Jacqueline Wade, Bellevue, WA, NW Silver Starr Rodentry and Northwest Silver Rodents Club and Rodent Rescue
QHow does one go about having a new color or coat type approved by AFRMA? Is it a proven six generations before AFRMA will consider this?

AIn order to standardize a new color/marking/variety, 20 different animals have to be shown in at least 3 different official AFRMA shows, and they have to represent at least 3 generations. The first person to show a new type of rat or mouse in the Unstandardized class is urged to submit a proposed standard, and these standards do not become official until the variety is standardized, so input and suggestions are always happily accepted and taken into consideration by the Board.