This article is from the Summer I 1998 AFRMA Rat & Mouse Tales news-magazine.

Q What colors would you suggest I breed to get Chinchilla rats?

A Chinchilla rats are relatively uncommon. Not many breeders have them, and it is hard to produce one with good color.

A chinchilla rat is essentially an Agouti with all the brown diluted out of their coat. They have the same ticked look, but their coat is gray, white, and black instead of slate, brown, and black. A great many Chinchilla rats are really nice blaze Berkshires.

Due to their scarcity and the limited number of people breeding Chinchilla rats, not much is known about their genetics. We do know however that this is not a color you can “create” by breeding together other colors. The best (and often only) way to get one is to buy from a breeder. Nichole Royer

Q How can I create a chinchilla mouse? 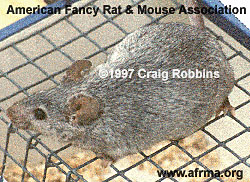 In order to create one, you need two things, an Agouti mouse and a Fox mouse of any color other than Beige. The chinchilla gene is what caused the orange belly color of Tan mice to turn white (thus Chinchilla is responsible for creating all our Fox mice except the Beige Foxes).

Breed the Fox mouse and the Agouti mouse together. Keep an Agouti baby and breed it back to its Fox parent. You should get some Chinchillas in the litter.

Q I have a Blue rat in with an Agouti Hooded Rex female and hopefully they will breed. What are the possible colors from this breeding? Will I get Blue Agouti in the litter?

A Your Blue rat, bred to Agouti, will most likely produce a litter of Agoutis and possibly some Blacks. The only way you will get Blue Agouti in this litter is if your Agouti has blue in her background. About half of the babies should be Rex.

If you would like to produce Rex Blue Agoutis, this is also very simple. If you breed a Rex to anything, you will get some Rex babies in the litter. All you will need to do is choose a Rex baby to breed back to the Blue father, or one Rex and one Standard baby to breed together.

Keep in mind, it is never a good idea to breed two Rex rats together. If you do, a portion of the litter will have patchy, thin hair and some will look almost hairless. Though they make nice pets, many people are put off by their looks. Nichole Royer