This article is from the Spring 1998 AFRMA Rat & Mouse Tales news-magazine.

Chris Faron, Lenoir, N.C.
QI have bred rats as a hobby in the past for several years, and am currently raising mice. I am particularly interested in where I can get more information on color inheritance of mice and rats.

AColor inheritance in mice and rats is an interesting and exciting area of study. Some of the better sources are listed below.


Though interesting and informative, keep in mind that these sources were created by and for scientists, not fanciers. Many colors mentioned do not correspond to those we have in the fancy. Many of our fancy varieties are not mentioned in the scientific text as they do not exist in the laboratories. There has also been an assortment of much less technical genetics information published in AFRMA Rat & Mouse Tales through the years. Of particular interest are the series of mouse genetics articles written by Bonnie Walters.

Chris Faron, Lenoir, N.C.
QBack when I bred rats, I somehow managed to breed a male with dark red eyes and brown ticking over a white body—spotted somewhat like a Dalmatian dog. I had to leave my rats behind when I left Canada so I was unable to continue any further with the breeding program. I’m curious if this is an established color variety as I would eventually like to raise rats again and specifically ones like these. 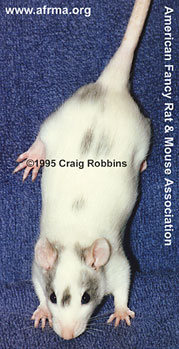 AThe mysterious rat you describe is in all likelihood a Silver Lilac Dalmatian. Dalmatian rats are very interesting and there is little information on them and on their genetics.

Dalmatian rats are characterized by a broken up pattern of spots all over their bodies. Interestingly, the color of these spots is always slightly diluted and heavily silvered. They are not simply mismarked Variegateds, though they are related to that variety.

The gene causing Dalmatian does not function within the standard Irish/Berkshire/Hooded/Capped series. Instead it appears to be a separate (possibly incompletely dominant) gene acting in conjunction with those causing Berkshire and Variegated.

extend the white on the rat beyond the areas where it would normally appear, and to dilute and add white to the colored hairs.

All this is conjecture and educated guessing however, and we really don’t have much information on this variety. Though they have been around for some time, no one has really ever studied their genetics.

What all this means is that this is not a marking you can just go out and breed for, you must at least start with one rat who has the gene that produces it. Though Dalmatians are rarely seen in pet shops, collared rats can occasionally be found. Naturally, if you can buy one from a breeder to get started you are much better off.