This article is from the Sep./Oct. 1996 AFRMA Rat & Mouse Tales news-magazine.

From our files
QAre you familiar with the Blue mice that are called Maltese? I have some of them and I was wondering if it is the same gene as your Blue and Blue Point Siamese. Also, I have a Brindle mouse who has tufts of hair behind its ears. Is this common or just caused by Long Hair in her background? It looks like its hair is longer than normal hair but not too long. I think the tufts look kind of neat, and I would like to breed more and try to make them longer. Can you tell me if Siamese bucks are more aggressive than other bucks? The buck that I have seems a little hyper to me and he isn’t even grown yet. I read something somewhere that mentioned Siamese bucks being more aggressive.

AYes, Maltese and Blue are just different names for the same thing. 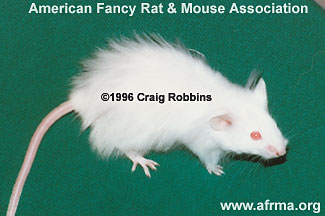 Your Brindle mouse may well be a Long Hair. Your description sounds very close to what many female Long Hairs look like. Long Haired males have better coats, and their coats are in their prime when they are young. Most Siamese mice are not any different in temperament than other mice. It may be that your particular male is just more excitable than most. He may mellow some when he gets older; however, breed him with caution as his temperament may be passed on to his offspring.

From our files
QA group of my mice have a truly metallic sheen to their coats. This isn’t simply the sheen of a healthy animal but a shine like newly minted coins. We have some like copper pennies and some like silver dimes. Is this a special strain? Is there a name for this strain? Also, is there a market for them in particular?

AYour “metallic” mice are called Satins. Satin is a coat variety where you can produce any color of mouse with a Satin sheen. There are also Long Haired Satins and Frizzie Satins. The Satin mice are very popular for pets and you shouldn’t have too much of a problem selling them for pets.

Satu, Finland
QHow can you make a Sable Siamese mouse?

ASable Siamese mice are very attractive. They are dark brown, with almost black points, much darker than Seal Points. Essentially, they are Seal Point Siamese mice with a dose of Chinchilla. In order to make them you simply take a Siamese and breed it to a Chinchilla. This will give you mice which are Aacchch—Sable Siamese. Unfortunately, the agouti gene (A) causes the color to be rather mealy, so you will want to work on getting them to be aacchch. Blue Siamese Sables are also well worth creating. Breed a Blue Point Siamese to a Chinchilla, creating Sable Siamese. Breed these Sable Siamese together and some of their offspring should be Blue Sable Siamese. If you do not have any chinchilla mice to work with, a Black Fox mouse can be used (Fox mice are caused by the Chinchilla gene), but you will then have to get rid of the Tan gene in the resulting generations.