This article is from the WSSF 2004 AFRMA Rat & Mouse Tales news-magazine.

Lynn Lehman, Racine, WI
Q A new girl at my place of work also likes rats. She had one that developed tumors and had to be put down, then her mother rescued her current rat from being killed by some cruel people at her place of work. I guess he’s very affectionate and is white with red eyes and black on his nose and on his behind.

I told my newfound rat friend that her rat must be a Siamese. I don’t think there are any around here, at least I haven’t seen any in the pet shops.

I had to go all the way to Milwaukee to get my rats. Last year, Petland had some Hairless rats, but I was afraid to get them because they seem so fragile! They seem to need much more care.

A Your friend’s rat does sound like a Siamese or Himalayan. I’m not surprised she found one. They were very popular in the pet shops for a while and just about every commercial breeder mixed them into their colony. The Siamese were first imported from England in 1983 (AFRMA was responsible for bringing them in). Unfortunately, a few pet shops got hold of them and found they could sell them for a lot of money. All of a sudden everyone wanted one and huge numbers were produced with nasty, aggressive temperaments (many ended up attacking their owners) so they developed a reputation for being mean. That was the end of them as a fad, but many still crop up in pet shops. It’s not unusual to still find them with poor temperaments, so I’m happy to hear that your friend’s appears to be fine. Siamese rats are my “true love” among the rodents, and they are the reason I got involved with them in the first place.


Hairless rats are deceptive looking. They look fragile, but really they aren’t. Other than keeping them out of drafts (they do better housed in large aquariums) there isn’t much else special required for their care. I had one once, and she was a really nice pet. They really aren’t my cup of tea, but many people adore them. They do feel neat (kind of like a warm shammy). If you ever run across them again and they have nice temperaments, you might want to give them a try. Hairless mice are another story entirely. They are about as delicate as you can get, and they have all sorts of medical problems as well. Nichole Royer

Paul Suplinskas, Grant, MI
Q For the past 5 or 6 years a friend and I have been managing a mouse colony that produces about 2000 mice per year. They are of all colors, and long haired, short haired, silky, and wavy haired. I was interested in finding more information on how some of these traits are inherited. Specifically, over the past 6 months we have had four mice born that we describe as calico—they are black, white, and tan. Since these are the only ones we’ve seen out of probably 10,000 that we’ve produced, we were curious about how rare this is and what the genetic mechanism is that causes it. Any information you could provide would be greatly appreciated.

Mary Ann Long, e-mail
Q I have several mice of which I breed. I recently discovered that I have a female mouse and it is tri-colored. I have never seen one before. Usually I get spotted or two-colored ones, but never three. My question is are these common or not. Would this be considered show quality or not.

If the third color is only on the belly area, then you have Spotted Tans. Spotted Tans can come in Banded, Dutch, Broken Marked, Even Marked, Variegated, or Broken Merle. Basically, these are spotted mice that carry the Tan gene and any colored areas on the belly are changed from the original color to orange, giving the appearance of “tri-colored” mice. Another way to get “tri-colored” looking mice is if you have Merle mice (Roan mice with solid patches) and introduce the spotted gene, then you will get Broken Merles (colored areas consisting of Roan, solid color, and white). Or, if you have Brindle mice (usually Fawn colored with dark “stripes” similar to tigers or Brindle dogs, etc.) and introduce the spotted gene, you will get Broken Brindles (not considered show quality but pretty pet mice) with the Fawn, black stripes, and white.


True ‘Tri-Colored’ mice will have the different patches of color on their topsides similar to calico cats. Unfortunately, these mice are usually somatic mosaics, meaning this effect is only seen on that one animal and will not pass down in the genes so you cannot reproduce it.

If your mice produce more of the same of what they are, then you have one of the above possibilities rather than a true Tri-color.

There was a gene found in England that was reproducible and produced Tri-colored mice but had a waltzing gene linked to the tri-color part. The breeders there were not able to separate the two genes so gave up on continuing the lines. Karen Robbins

What Will They Produce?

Olivia McDonald, Australia
Q I am the proud owner of five rats. I am about to breed two of my rats, Zinc and Rorchatz. I have tried to grasp ratty genetics, but alas, I cannot understand it at all. Would you be able to give me an idea what markings these two would produce. The male is a double Hooded Black Variegated (Down Under Hooded, Ed.) 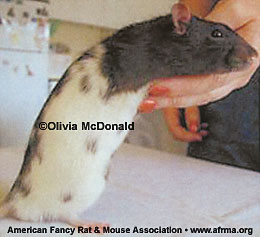 The female is an off white pink-eyed white.

A Without knowing what the female carries, they only thing I can tell you is that the Down Under trait is dominant and originated in Australia, meaning you will get some marked like the dad in the litter. As far as what colors you will get, without knowing the background of the female colorwise and what they both carry in colors, is anybody’s guess. You can try contacting some of the clubs in Australia to help you in your breeding endeavors. Below is a table of Australian clubs you can contact to help you. Karen Robbins

Heather, e-mail
Q I am having trouble breeding my mice to produce two-colored offspring. Is there some obvious reason why it’s not working. I have many different colors and was wondering if you can give me some tips on how to make it work.

A The answer to your question depends on what you mean by “two-colored offspring.”

The first thing to understand is that breeding two different colored mice together will not give you baby mice who have both those colors on them. That’s just not the way it works.

There are several very common and easy-to-find varieties which give you mice of more than one color. None of these varieties are things that you can “create” from scratch but they are all commonly found in pet stores.

Tan and Fox Mice: These mice have a colored top and either a bright orange underside (Tan mice) or a white underside (Fox mice). If you breed these mice to most other colors, you will get some babies who are Tan/Fox.

For more information on all these patterns and for pictures, I would suggest visiting AFRMA’s web site “Fancy Mice” pages or the Finnish Show and Pet Mice pages. Nichole Royer

Heidi Santos Macias, Finland
Q Hello! I’m a Chihuahua dog breeder from Finland. I started a rat hobby. In Finland we don’t have Dumbo, Hairless, Tailless, Odd-eye, or Dwarf rats. I just love them! I would like to have Hairless, Tailless, and Dwarf. Is it possible for a breeder to send those rats to Finland? How much will one rat cost? I think that they must need to send at least 10 or 20 rats.

A A few years ago AFRMA shipped Tailless and Dumbo rats to Belgium. As far as I have heard, the Tailless line was doing well, and there are Dumbo here and there about Europe, so I think your best course of action would be to contact breeders and clubs in any of the local countries except Germany, as they frown on “Mutants” there. Try the International Rat and Mouse Directory or IRMD as there are many breeders all over the world listed. You can also get in contact with the Finnish Fancy Rat Society to find other breeders that may be interested in the same rats you are and would want to work with you to try and bring these into your country.

I do not know of any breeders of Dwarf rats on the west coast of the USA. There are breeders in the Central and Eastern states. As far as I know, Dwarf rats have shorter life spans and are much more prone to illness than other rats. Most of the breeders I know (all across the USA) do not breed them or recommend that they be bred.

Shipping overseas is expensive, 500 or more U.S. dollars just for the cost of shipping. The rats would cost 10–50 U.S. dollars each. The most expensive being the Tailless. Normally, when shipping like this, several of the AFRMA breeders will work together to be able to send all of the rats that the buyer wants in one shipment. Helen Pembrook