This article is from the Nov/Dec 1996 AFRMA Rat & Mouse Tales news-magazine. 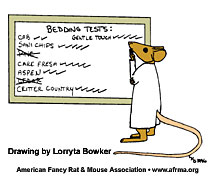 I used a sample of this on my stinkiest male mice. They went at least 10 days between cage cleanings with little odor. I put a small layer on the bottom of the cage, followed by a layer of Sani-Chips®, followed by a layer of CareFRESH™. The Gentle Touch™ is very good at absorbing moisture. I had a bottle leak in a cage of 3-day-old mice. The top of the nest that was mostly shredded toilet paper and CareFRESH™, was soaking wet. The bottom where the babies were was a little damp, but warm. All nine of the babies were not affected by this incident. I’ve been using the Gentle Touch™ for about a month now on both rats and mice, and there is little odor in my rattery/mousery/spare bedroom.

I went to Geri’s house to pick up the sample box that had come in the mail, to bring it to Karen’s to then have samples distributed to some club members. Geri warned me this had an odd odor, and she had to move it out of her house and into her tack room. Usually I’m game to try anything new. Geri handed me one of the packages and it didn’t smell too bad. I loaded the box, which consisted of four or six small packages. I put them in the back of my truck and drove to a nearby park about 10 minutes away, to walk my dogs. The windows were wide open in the shell. When I opened the back of the truck, I was nearly knocked over by the smell of this stuff. When I got home, I left the box in the carport as I didn’t want the smell to permeate my car.

This bedding consists of corn cob similar to Bed o’ Cob with green unidentifiable particles in it. According to the ads, it has “natural odor controlling system” but they don’t say what this odor controlling system is. Because of the odd odor and the fact that corn cob gets moldy real quick when it gets wet, I decided to pass on this little experiment. I just didn’t feel comfortable putting my animals on this stuff.

I got a small sample bag from Michelle Collie. I also used this on one of my stinkiest male mice (they make such good “lab” subjects). This is recycled newspaper with the ink removed. It’s greenish in color and comes in hard pellets, similar to the Gentle Touch™. I used it on top of the Sani-Chips® in place of the CareFRESH™. I wanted to see just how long I could go before I had to clean his cage. His cage lasted 14 days and still didn’t smell, but was dirty. It does pour out rather dusty, which didn’t impress me, but I didn’t notice any sneezing or ill effects. It is a very good odor controller.