This article is from the Fall 2001 AFRMA Rat & Mouse Tales news-magazine.

I recently tried out a Bounce Back Rat Toy on some of my rats. For those familiar with the Buster Cube for dogs, it”s the same idea; for those not familiar, this is a plastic toy shaped as a rat/mouse that has holes in the body such that inserted food tidbits will be released upon the rat maneuvering the toy.

My one complaint about the toy is a minor one. When I first attempted to unscrew the top and bottom pieces to insert the 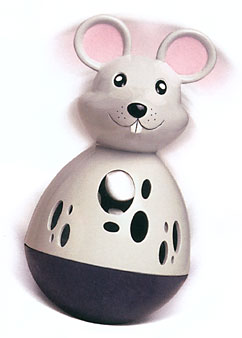 food, I was unable to. I finally gave up and asked my husband to try. After trying to open it for a few minutes unsuccessfully, he questioned as to whether it was supposed to come apart. After I assured him it was, he used a bit more force and was able to open it up. After that initial opening, I’ve had no further problems opening it to insert the food.

I first tried the Bounce Back in a cage containing three young male rescue rats. I filled the toy with Reggie Rat food. The boys appeared to enjoy bumping the toy around until the food was all out. Occasionally, one of the rats would play with the toy even without any food inside it. I next tried the Bounce Back in a cage containing two female rats, a middle-aged mother and her young daughter. I noticed the same amount of interest in the toy as I saw with the males.

I will remain neutral on this toy. While the rats did enjoy getting the treats out of the toy, with a retail cost of $6.99 at Petco, I have found other less expensive toys that the rats have played with more.