This article is from the May/June 1996 AFRMA Rat & Mouse Tales news-magazine.

From Michelle Collie
On April 29, 1996, I filled up three of my mouse cages with Gentle Touch™ bedding. The other three I filled with Critter Country. The idea was that I wouldn’t change them until they smelled. This test was conducted for 2 weeks.

Within the first week I could smell mouse odor. I did a sniff test. The cages with Critter Country had not lasted as long as I had hoped. I waited a few more days and by Friday of the first week I had to change all of the cages with Critter Country in them. These cages were going to the show, and I could just see what would happen, people leaving because of my cage odor.

The other cages that I had didn’t need to be changed and they had a nice aspen odor. The Critter Country had already broken down and the ammonia smell had started to fume into the air.

In conclusion, I left the Gentle Touch™ in for another week without changing. I tried Critter Country again, but had to change it before the week was up. I will definitely stay with Gentle Touch™.

A Little Mouse With A Big Problem

From Duffy Mouse
My name is Duffy and I am a little Brindle mouse with a big problem. You see, being a boy, and very American (no English Mice in my background), I have a decided odor. Mom says I just plain STINK! 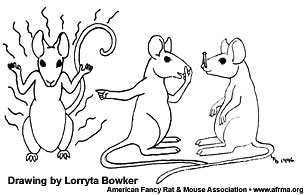 Because I smell so bad, no one ever wants to have anything to do with me. No one will hold me or play with me because I might make them smell too. They don’t even want to open my cage because it stinks, even the day after it is cleaned. I never get to go to displays or shows like the other mice (“He will make the car smell” is the usual excuse). Whenever the rat house smells at all, it is always blamed on me!

Lately though, I haven’t had this problem. Mom found some great new stuff that makes me not smell! It’s called Gentle Touch™ and its a pelleted type bedding that looks like gray rabbit pellets. It smells like oatmeal, and I’m told that it is made out of Aspen.

Mom puts a thin layer of it on the bottom of my cage, then covers that with a layer of Sani-Chips. The first time mom tried it she was surprised when I didn’t smell at all the next day. She was amazed when there was still no smell 5 days later.

Needless to say, both mom and I highly recommend this product. It doesn’t bother me in the least to have it mixed in with my Sani-Chips (though I don’t know if I would like it straight), and when I ate some, it didn’t hurt me at all. Unfortunately, when the pellets start to break down they make my cage look dirty, but it still smells clean. Mom says it works great on rats too, and the big cage with eight rats didn’t smell a bit even after letting it go a whole week without cleaning!

From Karen Robbins
It all began with a letter to Gentle Touch™ Products asking for donations for AFRMA in exchange for a free ad in AFRMA Rat and Mouse Tales. They kindly sent a large bag of their cat box filler. We bagged it into smaller bags so several people could try it out. Then the test. I put it in our pet rat cages in the house and in a few of the rat cages in the rat room. They didn’t smell dirty or of ammonia when it was their normal time to be cleaned. Several days later, still no smell. I finally cleaned them just because they looked dirty (the Gentle Touch™ breaks down from the pellet form as it gets wet). I tried one more bag, this time with the intention of not cleaning for a long as possible. I used a whole bag in our large 20-gallon long tank of five large pet rats. After a week and a half, there was absolutely no dirty cage smell or ammonia smell. (These rats normally need cleaning every 5 days.)

The second batch of Gentle Touch™ arrived in April–this time a large bag of the Pet Bedding and one of the cat box filler (the Pet Bedding is a larger pellet, the cat box filler a smaller pellet). The real test would come by comparing which worked best for the rats and mice, since we had determined that the Gentle Touch™ WORKED. Our “testers” got a sample bag of their choice. Back to the rat and mouse rooms. This time I was able to use a sample bag of each size and just in those two little bags, did almost all of the rats in the rat room and all the cages in the house. The cages averaged two to three times longer before needing cleaned than they need with just Sani-Chips. We agreed that we liked the cat box filler for the rats and mice.

Gentle Touch™ definitely works superbly over anything else I’ve tried on the market or have heard of other members trying. I’m definitely hooked. In fact, because it is such a great product, I’m working on being a distributor for them. If anyone is interested in getting this product in Southern California, call me in June to see about getting some.