This article is from the Fall 2000 AFRMA Rat & Mouse Tales news-magazine. 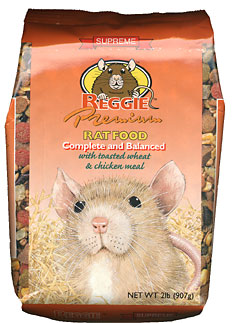 I first heard about Reggie Food from a CompuServe member who lives in Northern California. No one down here had heard about it, so I wound up calling the distributor in Arizona. They had a pet shop in the Valley who carried it. They called the pet shop, the pet shop called me. It’s very expensive! About $3.50 a lb. Each bag is 2 pounds. The pet shop said they could get bigger bags, but they had to order quite a bit in order to charge their customers a reasonable price. A 2 pound bag, for 8 rats, lasts me about 1.5–2 weeks. I also feed lab blocks and supplement with fresh foods.

I have seen improvement in the overall health of my rats in the time that they’ve been on it (about 2.5 months). My two Dumbo girls, Atlanta and Purdy, were driving me nuts. All I heard was Atlanta whimpering, as Purdy barbered her bald from her cheeks to her shoulders. When the fur was gone, Purdy kept barbering. Atlanta had little sores all over her naked skin.

Purdy has stopped barbering Atlanta since they’ve been getting the Reggie Rat food. Atlanta’s fur is starting to grow back. The sores have healed up. Both rats are about 2.5 years old. Other than tumors, which are being removed today, they are in good health. I’m hoping the quality nutrition in the Reggie Food will help extend their life span.

I tried mixing the food in with the seed mix I was using, as the directions say. The rats dug out the Reggie food and ignored the other food.

The other rat food is much cheaper—about $3 for 5 lb., but I throw a lot of it out. It has the least amount of sunflower seeds, but I go through it and pick all of them out. That causes a lot of waste. The rats don’t eat every bit of the Royal seed mix, and trash or defecate on the rest of it. They eat every bit of the Reggie food, so I’m not dumping a bunch of rat food every day. There’s no sunflower seeds to pick out. I don’t have to spend time picking out sunflower seeds and other unwanted bits and pieces of junk, and I’m saving money.

I am very happy with this food. I’ll continue to buy it, but I’d much rather AFRMA carry it so I don’t have to contribute to the financial well being of a pet shop that shouldn’t be in business. I’m also hoping that AFRMA sells it for less than what I’m paying now.

Gina Hendricks, Oceanside, CA
I only gave it to pregnant and baby rats. They liked it and ate all of it, but I’d rather feed my rats lab blocks.

Nancy Ferris, Corona, CA
I opened the bag and noticed it was grain. Since I’m a firm believer in lab blocks over grain as a diet, this became a treat. I did notice that the grain was fresher looking than what usually comes out of a bag.

The various treats went over well. The rats grabbed them out of my hands and gobbled them down.

Geri Hauser, Riverside, CA
The first thing I noticed about Reggie Rat food was the fresh grain smell when I opened the bag. I like the fact there are no fatty nuts or seeds. My rats loved it and ate all of it. I would feed this more often because it is a lot healthier than the rat and mouse grain and seed mixtures you find in the pet stores.

Reggie Rat is a complete and balanced food with toasted wheat and chicken meal. The mix of ingredients includes chicken as a low fat source of protein and alfalfa that is rich in both protein and fiber. Feeding Reggie Rat encourages superior coat condition as Reggie Rat does not contain any nuts or seeds that can cause skin problems and spots in rats.