This article is from the WSSF 2013 AFRMA Rat & Mouse Tales news-magazine.


I’d like to talk to you about Dutch mice. You see, a few Americans have admired my Dutch and are sad that Dutch aren’t available to them—but they are! I’m very enthusiastic about them as a variety and want to spread the Dutch love!

I’ve done many test matings to determine the genetics behind them, and I have found that Dutch is just the common recessive spotted ss, rather than the often assumed ‘du’ (as the Dutch rabbit) or even sdu/sdu, which is what I first suspected.

People often think Dutch is a separate gene because it appears to breed true after a Self outcross, when actually ss naturally causes clumping in the pigment around the rump and a blaze marking on the face, which makes it look as if Dutch breeds true. In actual fact, if you outcross a Broken to a Self, you see the same Dutch-type markings appearing in F2 litters and you can breed some pretty good Dutch from those (which I have done). Breeding Dutch from piebalds is a bit easier than breeding Broken from piebalds. Brokens need that rump and face colour almost eliminated except for one or two spots in each area. It takes a lot of breeding to break the patches up into proper Brokens again. Only recessive spotting (ss) makes Dutch (and Broken and most Evens of which are selectively bred to get the markings in the right place). Variegated and Banded won’t make Dutch; avoid putting either into Dutch lines.

Anyway, if people were interested in breeding Dutch, they need only to work with piebalds which exhibit cheek patches and saddles (regardless of any other mis-markings) and selective breeding will get them to Dutch. If you are tempted to breed a new line of Dutch mice, this is how you would go about it:


Make no mistake, this is a long term project with heavy culling of stock needed, but it would be worth it in the end.

I just wanted to share that; I hope the information is of some use to someone! 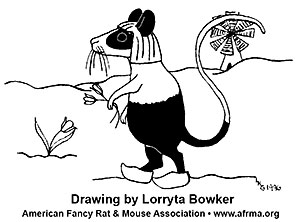