This article is from the Holiday 1998 AFRMA Rat & Mouse Tales news-magazine.

In the fall of 1983, Larry and I (Nancy) found ourselves in a pet shop in Long Beach, where we lived at the time, looking for a female rat or two. We had just joined MRBA. AFRMA was just a twinkle in Karen’s eye. Actually, maybe major glare would be a better description. We got the notice about the newly formed AFRMA around this time. Larry picked out a Pink-Eyed White, and I picked out her littermate, a Silver Black Berkshire. I wasn’t impressed with Larry’s choice. I thought of Pink-Eyed Whites as either lab rats or common pet shop rats— nothing spectacular or exciting about them. Larry had a Pink-Eyed White rat as a kid, and had a connection to them. He named his rat Snowy (no comment) and I named mine Rita Rat.

We attended AFRMA’s first show in January as spectators, and showed Snowy at the March show. I also showed Rita in the pet class. She took 2nd place to a very 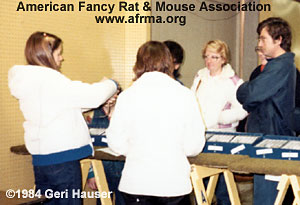 cute, very personable rat named Oxford. Not knowing anything about preparing a rat for show, Snowy got marked down for having staining on her coat. I didn’t show her again, which was probably a shame. Looking at old pictures of her, she was a large, typey rat, and probably would have shown well if I knew to bathe her. The following October, I decided to breed Rita to Oxford. Again, looking back, I am horrified that I did this. Rita was just turning a year old, and rats should be bred a lot sooner than this due to pelvic bone fusing. Also, there was no real point to this breeding other than both rats had very nice temperaments. On November 3, 1984, I returned home from a dog show feeling very good. My Sheltie, Dani, had just earned her first points towards her Obedience Trial Championship. To top off my day, Rita had just given birth to four babies. Oddly enough, one of those babies in that litter would mirror Dani’s upcoming wins. The litter consisted of a Black Hooded female, a Beige Hooded female, a Silver Black Berkshire male, and—YUCK—a Pink-Eyed White female.

Right from the start, I knew Frosty was different, but I wouldn’t admit it. When her baby coat came in, I noticed it was white—very white. Not that I had a lot of experience, but all the baby Pink-Eyed White babies I had seen in pet shops looked sort of gray-white as babies. Not this one. She was WHITE. Since it was nearly Christmas, I named her Frosty. Another feature that was apparent very early, she had very nice, big ears. Over the next few months I watched her grow. She was very pretty, but I had it stuck in my mind that a Pink-Eyed White was nothing special. It was just a “lab rat.”

In March 1985, I went off to Sheltie specialty and Larry drove down to San Diego for the AFRMA show. He took Frosty and her show box with him. I told him that Karen would probably laugh Frosty off the table. I had a very good day at the specialty. Dani won her two classes and hit the half-way mark to her Obedience Trial Championship. Larry 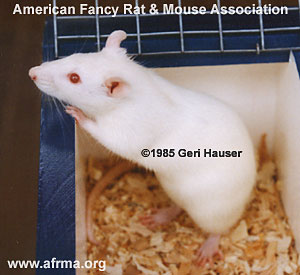 arrived to pick me up with Frosty on his shoulder, carrying the blue and yellow Best In Show rosette. At AKC obedience trials, the High in Trial ribbon is also blue and yellow. My first thought was, “What’s Larry doing with a High in Trial rosette.” When he told me that Frosty had won Best In Show, I asked him if there were any other rats there. I really had a mental block against Pink-Eyed Whites. I guess I just didn’t think they were worthy of Best In Show, even though deep down I knew Frosty was a very nice rat. The next day I again showed Dani. She won a very large class that brought her to the three-quarter mark for her Obedience Trial Championship. Seven days later, she finished. By the end of the year, Frosty had collected a total of four Best In Shows. Dani had also done a lot of winning. She ended up being the #3 Obedience Sheltie in the country that year. I ended up with a very swelled head.


It became a foregone conclusion that Frosty would win at the January show. On the drive down to San Diego, I thought I noticed a slightly yellow tinge to Frosty’s coat. I had bathed her the night before and made sure there was absolutely no staining on her. Karen was just as critical then as she is now. There was another Pink-Eyed White entered—a very nice young male. Karen picked up on Frosty’s yellow tinge. The walls of the room had a yellowish cast to them, so Karen even held Frosty up to the window. Yes, she was yellow. She lost to the male.

Since at the time I was showing Frosty, I was also showing Dani, and I was very aware of showing a clean animal and enhancing the white. When getting Dani ready for the breed ring, I would “chalk” her white parts with corn starch. The corn starch brought out the white color and also helped make the hair on her legs stand out. At dog shows, like rat and mouse shows, nothing foreign is allowed on the dog in the ring. The corn starch had better be brushed out before the dog enters the ring. If Dani walked into the ring, shook, and a white cloud appeared, she would be promptly tossed out of the ring. The same would apply to Frosty.

The night before a show, I would bathe Frosty with a whitening type shampoo. After I bathed her, I would blow her dry. I made sure there was no red staining on her neck that I had missed in the bath. If I found any stained hair, I would spot clean her. Then I would dust her with corn starch to help bring out the white and to put some texture back into her coat. She had all night to shake it out. This also helped her not get a little dirty before I left for the show, even though I was putting her into a clean cage. In the morning I would rub her with a cloth to make sure there was no remaining corn starch. I made sure that when I rubbed my hand on her, it didn’t turn white or feel chalky. I also bathed her in between shows so she never was very dirty at any time.

The March show rolled around, and fell on St. Patrick’s Day. I entered Frosty and thought I could bleach out the yellowish tinge by using laundry bluing. I learned a lot by showing Dani in the breed ring, and bluing was used to enhance the white on Shelties. Big Mistake. The bluing grabbed the yellow staining and gave Frosty a greenish cast. I should have left her home, and who knows why I didn’t. I went ahead and showed her, and of course Karen made the comment, “She’s green! Did you dye Frosty for St. Patrick’s Day?” At that point, I thought Frosty’s career was over. She had four Best In Shows. I had tried to breed her the previous summer, but her babies wouldn’t nurse and died within a few hours. This happened twice with two different males. The third attempt at breeding her didn’t take. There were no Frosty babies to carry on.

In April of 1986 we moved to Corona. We had been there about a month when it was time for the May show. In all the commotion of moving, I hadn’t really “looked” at Frosty. I had it in my mind she’s yellow, end of subject. About the time that the entries were due, I looked at Frosty. Did she look white again, or was I imagining things. I took her outside to inspect her in the sunlight. Yes, she had molted out her ugly yellow coat and was back to her sparkling white self again. She won Best In Show at that show and again at AFRMA’s very first show at the Orange County Fair in July. Her record of six Best In Shows still stands today.