This article is from the Fall 2001 AFRMA Rat & Mouse Tales news-magazine.

Oh Boy, Oh Boy: An Insight Into Life for Male Rats in Australia

Founder of the Australian Mouse and Rat Information Service 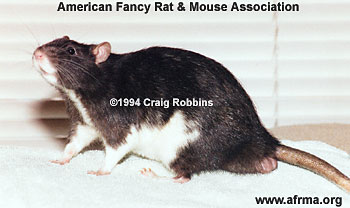 It does not seem fortunate to be born a rat in a human plagued world. More so, it is even less lucky to be born a male rat.

Rat owners will agree that our lovable choice of a pet is often discriminated against; however, it is the male rat who is the most misunderstood.

Many breeders are finding it harder to get homes for boy rats than for girls. It is not uncommon for breeders to house more females than males, leaving them with excess male rats who either become neglected through lack of handling or become “feeders”(sold as reptile food).

Pet shops favour selling their male rats and mice cheaper to customers who want them as reptile food, finding female rodents can be sold for a higher cost as they are more popular for pets.

While working in Pets Paradise—a well-known pet shop chain here in Australia—I found it was a common practise for male rats and mice to be sold for reptile food. This was due to the fact that (to quote my former boss): “Nobody wants them as pets. They all want girls.”

The Australian Mouse and Rat Information Service is always left with more males to foster than females. Ironically enough, I have found that males are the more gentle of both sexes.

One of the reasons for male rats being unpopular seems to stem from their close relative the MOUSE. Basically, Mickey stinks, while Minnie does not. The sales pitch I have heard in pet shops for rodents is, “The females do not have the odour that the males do.” This applies to selling rats too.

Yes, male mice do have a tangy scent. People who do not know rodents well seem to assume the same goes with male rats too, when in fact male rats do not have as strong a scent as mice.

Siam, my Siamese mouse, does have an odour typical to male mice, but this is no problem if his home is cleaned regularly. Basquait, my old foster boy rat, does not have an odour at all.

With mice and rats there are some simple tips to keep away unnecessary odours. Make sure their nesting material and litter does not become damp. Avoid feeding them meat, dairy products, or too much watery green vegetables, such as lettuce. Meat should be avoided in particular as it makes their poo stink, to be blunt. Another tip is to avoid rice hulls as litter. Although I have not experienced this myself, apparently if mice or rats eat this, it makes their poo very smelly and runny.

The next reason male rats seem unpopular is the myth that they are more aggressive than females.

Rats are colony animals and one of the few species whose males do not drive away adolescent males when they come of age. Unlike buck deer and horse stallions, male rats allow other males born into the colony to continue living in the family unit for as long as they choose to.

Adult male rats introduced as strangers tend to fight, and sometimes it is best to keep them separate. However, I have quite a few success stories where male rats have learned to get along after a few days of minor scuffles.

Instinct is still strong in rats when it comes to the ways of their wild ancestors. Both male and female domestic rats can become aggressive if neglected of handling and proper care by their owners. Pet rats are quick to return to their wild-rat ways if left for too long without human attention.

The last reason for not wanting a male rat, and one I hear about more than about the smell, is their testicles. Yes, those hairless jelly beans, which seem way too big for the needs of one rat, can look rather...well...let s say...yucky! They do not hide discreetly away when not in use, rather they stick out like a portable two-seater couch.

Some claimed “rat lovers” who do like rats, still cannot seem to stomach the sight of these attributes and favour the more neat and compact female instead. You must understand that male rats have to fertilise a lot of eggs inside the female, and often have to perform such tasks every month with many, many females. Therefore, male rats need enough “ammunition,” so hence the “larger than most” size. After all, rats would not be such “prolific” breeders if it weren t for those testicles.

If you love your male rat, then size does not matter, rather it is personality which makes him a great pet. However, if you wish to keep him in a mixed home of males and females and do not want babies, or you really cannot handle the sight of his testicles, then a vet can de-sex him for you. Make sure your vet is experienced with small animals so there is less risk of complications during surgery, particularly with the correct dosage of anesthetia.

Personally, I have never had a problem with aggression in my male rats. I actually find them a lot more relaxed and less “frantic” than the females. Both males and females will make equally as good pets if handled gently, with respect for their vulnerabilities and compassion towards their needs for attention and general care.