This article is from the Jan.-Feb 1986 AFRMA Rat & Mouse Tales news-magazine.

In South America, in the area where I grew up, eucalyptus is very plentiful and the native folk make good use of it.

Every week, fresh branchtips are brought in and spread under or behind the furniture and under the rugs to keep away bugs and beetles.

Medicinally, the oil is used in cough medications, and steam treatments help to clear the sinuses.

When several of my pet rats developed respiratory congestion, I remembered this folk remedy and decided to try it on them, especially since I have easy access to eucalyptus trees. I picked a handful of new-growth leaves, thoroughly crushed them in my hand and placed them in each cage.

Right away the rats began to fight over them, and by the next morning in each cage the rats were sleeping on a neatly arranged eucalyptus leaf nest. I also noticed that some twigs I had added were thoroughly shredded and all the pods had been nibbled, even though each cage had its own gnawing block.

Daily I continued to add fresh new leaves, twigs and pods (after removing the previous ones), for about three weeks.

Within a few days, improvement was already noticeable in some of the rats. Most of them recovered within two weeks, but a few took longer. Three of them never quite got over their wheezing, but they got a lot better then they had been.

Since then I make their gnawing blocks out of eucalyptus branches, and they can’t seem to wait to get to that fresh bark to tear it to pieces.

Remembering also the “bugs away” properties of eucalyptus, I decided to place some into each tank or cage that I took to the last show. It made me confident that I was not taking along any unwanted stowaway bugs to the show, and neither would there be any coming back with us.

All I can say is that the only time I have had no problems with mites after a show is when I used the eucalyptus leaves as part of the bedding in each cage and tank! 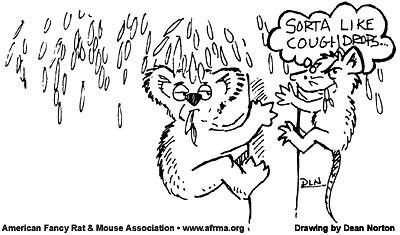