This article is from the WSSF 2016 AFRMA Rat & Mouse Tales news-magazine.

Tanya Larry Reeder, Facebook
Q I’m wondering if anyone can give me some advice. The attached photo is my male mouse Norman. He is having eye issues and it’s been going on for at least four months. Norman has seen the vet numerous times, has been treated for conjunctivitis, has had four different prescribed eye medications, and is currently on an eye drop. None of which has healed him. Though he gets some relief, it never goes away. 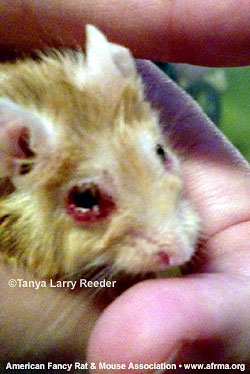 Sadly, local vets do not deal with mice often. I’m the only mouse patient at my vet, so, basically she is learning as we have visits, and she does her very best to help my babies. He is happy and healthy in every way other than his eyes. I have crossed out every allergy-causing thing but it still made no change. Could this be mites on his eye lashes? Do you have any suggestions? He is getting treated tonight after work for parasites. He has no other parasite signs though which is why I suppose the vet hasn’t treated recently. I will be using Revolution. No other irritations. On occasion I see him rub them but it doesn’t seem to be the eye itself, it’s the surrounding area.

A The eyelids and surrounding soft tissues are very inflamed, hyperemic, and thickened with scabs (proliferative and exudative bilateral blepharitis/dermatitis) and possibly conjunctivitis (I can’t see from the picture) by what I would surmise is an infectious process, most likely primarily bacterial, but combined or complicated by viral or parasitic (pruritus?) would be possible. The nose may have a little nasal discharge as well.

The specific treatment is not expensive, but depends upon if the corneas have been compromised or not and if there is involvement of the lung lobes. If not treated, keeping this mouse alive would be inhumane as that has to be very painful.

Has the veterinarian done any cytology on the lesions to look for bacteria, fungi, mites, or viral inclusions in the cells? One can pluck an eyelash and place in mineral oil to see mites. One can do a tiny scraping and do cytology.

If he had mites—Revolution or Straight Ivermectin (200–400 micrograms/kg body weight) would take care of it.

If he has bacteria, an antibiotic should take care of it unless the bacteria is resistant, culture and sensitivity.

If it is allergic and the corneas have been fluorescein stained to ensure no corneal involvement, topical antibiotics with an anti-inflammatory steroid should help.

Is the mouse scratching his eyes (pruritis)?

The likelihood of neoplasia is low due to the site specific nature of the lesions.

Update: She treated him for mites and he seemed to be improving and her vet wanted to do a second treatment. She took him in and had a culture done on his eyes. The results showed bacterial infection, no fungus or parasites. The new antibiotic she is using is Trimethoprim/sulfamethoxazole. She also started him on a low protein diet. Editor