This article is from the Nov./Dec. 1986 AFRMA Rat & Mouse Tales news-magazine.

Kelly Kott, Lincoln City, OR
QWhat is wry neck? I first saw the term in the Sept/Oct. issue of Rat & Mouse Tales and I’m curious about it. Is it a contagious disease? How common is it?

AWry neck is the term given when the animal tilts its head off to the side. In rabbits it is caused by an inner ear infection. In rats it could be an inner ear infection brought on by a respiratory virus or bacteria traveling up the nasal passages and settling in the ear causing the rat to do this. Occasionally, it will become so bad with the head turned so far, that the rat will keep rolling over, unable to stay upright. Also, it may cause the animal to become a waltzer, throwing its head back and running in circles. In any case, medication can be used but the best thing to do if the symptoms progress to the more serious forms, is to destroy the animal. It is not contagious and has not proven to be hereditary, as I have bred a pair of rats with wry necks and none of the babies ever got it. Every once in a while I’ll have a rat come down with a wry neck but it is not as common as some problems.

Kelly Kott, Lincoln City, OR
QHow many mgs. of vitamin C are required daily to supplement the deficiency in adult rats? I put liquid vitamin C (from the health food store) in my rats’ water bottles, but I’d like to know the correct dosage. Thanks.

AAs far as I understand, rats manufacture their own vitamin C and do not really need to be supplemented. The vitamin C is helpful though when they have a cold or are under stress. The different small animal vitamins have anywhere from 10 mg/ml in Oasis Hamster Vitamins, 50 mg/ml in MultiPet, 51.33 mg/ml in Avitron to 160 mg/ml in Oasis Guinea Pig Vitamins. As you can see, there is quite a difference. I don’t know the exact amount for rats. You might want to ask your vet though and see what dosage requirements he recommends. Vitamin C is water soluble, so any they do not need is passed out in their urine.


AI’m not sure. I’ve read that babies will eat droppings to change from milk to solid food because they need the bacteria in the feces to digest the solid food. I do know that rabbits have a different kind of dropping in the morning hours which they eat because it is very high in nutrients. You might want to ask your vet what he thinks is the reason. Does anyone else have any ideas? 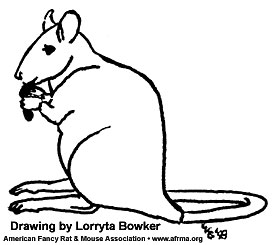 Update Note: Rats need to practice Coprophagy (copro=excrement, phagy=to eat; co-proph-a-gy). Rats eat a large amount of cellulose and other things of low nutritional value and can’t digest all the vitamins and minerals in greenery the first time through. Their intestines are too short for this kind of diet and do not possess the digestive enzymes necessary for breaking down plants and grains into basic elements which can be absorbed. Bacteria that live in large intestines can break down foods into basic elements, but these elements cannot be absorbed through the walls of the large intestine. The food must be reconsumed by the rat to get the most out of it. Baby rats eat the droppings not only for the bacteria in them, but also for the partly digested nutrients which is more easily tolerated by the young rat’s own digestive system. The droppings contain vitamin B1, and if this vitamin was not consumed daily, the rat would die in about 2 weeks.