This article is from the Winter 1998 AFRMA Rat & Mouse Tales news-magazine.

“Home Is Where The Heart Is”

I’ve always been fond of small rodents, particularly rats. I enjoy breeding and showing them, but have always had a soft spot for those who are unwanted, abused, handicapped, etc. This story is about some of the “not quite show quality” rats I’ve had over the years.

I used to work at a local pet store and got a couple of them from there. The first was being used as a breeder to produce babies to be sold in the store. She was lynx and white; I dubbed her Mama because she loved babies.

I noticed that Mama had delivered a stillborn litter one day, called it to the store owner’s attention, and was told “that happens sometimes.” Mama was allowed to nurse babies from other litters for a while, then was returned to the tank with the males to be bred again.

When her next litter was also stillborn, the owners still didn’t seem to care, so I bought her and brought her home to be a roommate for Patty, a rat I’d acquired from an equine rescue center. Patty had been rescued from an abusive situation where she hadn’t been fed or cared for properly by her owners and was missing part of her tail. The people at the equine rescue center had taken her in and I adopted her from them. She was fat and sassy when I got her. Patty and Mama got along fine and enjoyed each other’s company.

Mama really lived up to her name. She would instantly claim any young rat that I brought home as her “new baby.” And it didn’t matter if the young one was a weanling or half-grown.

Most of my females are housed in a 100-gallon aquarium, and Mama had one corner that she considered her “nest” although she never actually made one there. It was always funny to watch Mama take her “new baby” by the nape of its neck and carry it over to put it in the “nest.” Keep in mind that some of them were almost as big as she was so carrying them was a real chore at times!

She never hurt any of them, just cared for them till she decided that they were ready to venture out on their own.

I also rescued another little female that some customers brought into the store one day. They brought in a cage-full in hopes of selling them to the store. There was an adult pair with a 2-week-old litter, and a young female from a previous litter. The owner of the store decided to take all but the young female because she was handicapped, born with only one hind foot. He didn’t think he could sell her (even as snake food), so didn’t want her.

The people who’d brought them in said that was okay, they’d just turn her loose in a park somewhere. This is where I came in again. I couldn’t let them just turn her out like that, so she came home with me that evening and became Tootsie.

I put her in the aquarium with the other girls and she settled in nicely. She ran around as if completely unaware that she was handicapped in any way. She did have one small problem though, she couldn’t jump to the top of the tank and run around the edge with the other girls. With only one back foot, she couldn’t get the “boost” she needed to reach the top. And you could see from her efforts that she really wanted to be up there with the rest of the gang.

I thought about how to solve this problem and finally figured out that a wooden ladder made for parrot cages was the answer. I bought one, put it in the aquarium, and Tootsie ran straight to the top like she’d done it a million times before! She loved her new-found freedom!

Of course all of the other girls had to check out the ladder too. They were a little unsure of it at first, but they all learned to use it. You should see them at snack time! They all crowd onto the ladder, lots of pushing and shoving, but it never crosses anybody’s mind to jump to the top of the aquarium and get there first! I guess convenience has its disadvantages at times!

A couple of weeks after Tootsie came home with me I noticed that she was starting to look a little “fat.” I told my boyfriend that it looked like we might have a little “surprise” on the way. Sure enough, about a week later I came home from work and heard tiny little peeps coming from the box in the aquarium. When I checked, Tootsie had had 10 babies!

We found all of them good homes, but decided to keep one little female—she has a very unique personality. She made up her mind that it was okay if she touched you, but you weren’t allowed to touch her. If you tried to pet her, she would run and hide in the box. Therefore she earned the name Hidey (note the spelling). She lived up to that name throughout her life. 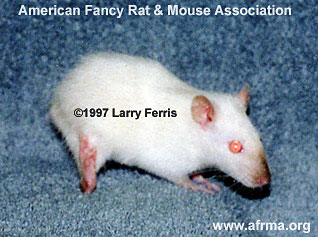 Then there was a little female Siamese Tailless who was also born handicapped. I acquired her from someone who just wanted her to go to a good home. Her name was Little Bitty and her hind legs were deformed. Instead of walking on all fours, she walked on her front feet and her hocks, with her back feet sticking straight up. She mastered going up and down the ladder in the aquarium and would run and play with the other girls, occasionally putting one of them in their place!

I’ve had a few others over the years too—George, who was blind in one eye and his owner just didn’t want him any more—Audrey, who’s owner became a flight attendant and asked if I could take her—2 Rex boys (a father and son) and Osha (a female), whose owner moved to Maryland and couldn’t take them with her. My newest addition to the family will be a weanling female with one eye, I’ll pick her up at our January ’98 show.

So, when you’re out looking for that perfect companion rat, keep in mind that “perfect” doesn’t necessarily mean show quality. Just remember, they don’t mind if you have a handicap, or if you’re not a super-model—just give’m a chance, they’ll prove it to you . . .