Following is a letter to the person who triggered the events that brought Nadia into my life.

I write to you today with a broken heart.

You don’t actually know me, and the first time we encountered each other we did not really meet, but shared adjacent seats at a Quadrille Academy festivity. You arrived in the nick of time and your enthusiasm and joy for your children was infectious. That is what I remember about you although I don’t think we have ever formally met.

A year or so after that you became a class parent for my son Erich who was your daughter’s teacher. Early that year you presented him with a fully equipped cage so there would be a classroom pet that year. He went to the pet shop and picked her out. Throughout her life he has been nearly tearful whenever he describes the moment he adopted her. The clerk at the store reached into the cage and all of the rats scurried and scattered. But she jumped into the palm of her hand, as if to say, “I want to be the chosen one, I want to go with him, please take me.”

That summer evening he brought her to my house, still in the box that they packaged her in at the pet store. He was afraid she would get loose in the car, and she was a tiny ball of energy. He left her with me while he went to school to get the cage and returned shortly with it. So endearing was she that his conscience would never allow him to leave her alone at school after hours. In those years he had a lot of activities and classes that took him away evenings and on weekends, and he would always bring her to me to be cared for in his absence.

This habit lasted until the first winter school break, when I had her with me for about two weeks. Each parting 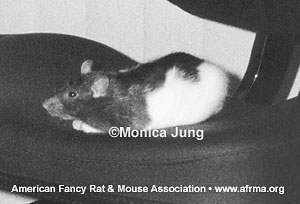 became more and more difficult. The rest is history. I had to get all new equipment and send in a “substitute rat.” Nadia would now live with me permanently, a sacrifice on Erich’s part for he cared for her as much as I did.

We named her Nadia (after the #10 gymnast of Olympic fame) because of the way she could vault from the floor of the cage to the door opening on top like a gymnast mounting the uneven parallel bars. What she had was personality, pluck, and charm. Our close bond grew from the sweet way she would cuddle up under my chin and sleep on my collarbone, sometimes with all fours in the air. She was relaxed, secure, and comfortable with me. We gave her the run of the house during a time each day and while she was still hardy, she would always precede me to the kitchen to wait for breakfast. She was gentle and loving. Her name was Nadia, but I often called her Precious and Princess. If I were to write more of her cute ways, this letter would become a book.

One day last May, she suddenly looked at me with a sideways glance, and I immediately bolted out of the house to take her to a local veterinarian. Head tilting in rats is a serious problem as it means the loss of balance and equilibrium. I wish this had been her only problem. It is difficult to cure, as it can result from an inner ear infection or a pituitary tumor. Once the symptom appears it is generally too late. During that month’s visits he predicted that she had about two weeks to live, so it was time for a new veterinarian if her condition grew worse.

She also developed tumors and we had three successful surgeries to remove them. The fourth surgery recently (we took her to our special vet in Los Angeles who will be featured in a soon-to-be published issue of Life Magazine) was a success, but she expired from an embolism once she was up and walking around after the anesthesia. It was her second delicate surgery in the abdominal/intestinal area. The previous tumor biopsy in August had confirmed adenoma carcinoma. The tumors near her intestines had reappeared. She had a strong will to live because she loved her life with us. No other veterinarian was willing to give her the care she so richly deserved.

As I reflect on her life with us I am overwhelmed with joy and sorrow. She filled our hearts, our home, and our life. We took her everywhere and she bore her illness with grace and dignity and placed herself in our complete trust. We had her for such a short time, but she was larger than life and the quality of her presence in our lives cannot be measured. It is so painful that these creatures have such a short natural life. She was nearly 2½, and by some standards this was far past her life expectancy. As I learned how much she had come to mean to me, I spared no effort or expense in trying to ensure her longevity and comfort. 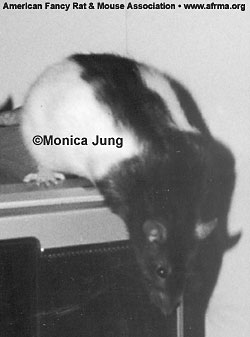 So, why did I feel compelled to write to share this with you? It is because we never know how dramatically an ordinary event can touch our life at the time it occurs. It is only long after when we look back and realize that brief encounters can trigger events that we can never foresee and can be moments that enrich our lives beyond measure. Your action has been more than a ripple; it has been a riptide. I wanted to let you know how much happiness she brought to us and how she will be sorely missed. Someone about whom I had a fleeting positive impression, a stranger during a brief and singular moment, triggered her presence in our life.

Nadia was my best friend. Erich was with me when we arrived at the vet to pick her up and get the horrible news only hours after the doctor had voiced his amazement that she was walking around and had endured an arduous and delicate surgery. There was much concern that the tumors might have attached themselves to her vital organs, but they had not. My only solace is that she faces no future suffering and that I played a large part in giving merciful and loving care to one of these most woefully and wrongfully misunderstood and maligned of God’s species. I have always loved rats and among them she was beyond extraordinary.

Thank you for your part in triggering the events that brought her into our lives.