This article is from the Fall 1999 AFRMA Rat & Mouse Tales news-magazine.

Yrkoon left to Rat Heaven two years ago and is still very missed. He was one of the first male rats I truly got to know and is definitely one of my favourites. He was a big chocolate brown rat with two white front paws and white belly. He shared walks in the park with me, following behind me like a little dog, and amused other people with his charming and curious nature. I found him to be very noble and also very generous. We even nicknamed him King Yrkoon.

He was the largest and oldest of six males—Raister, Gangrel, D’vern Da Vermin (Yrkoon’s look-a-like son), Emmon, and Conhan. Thus, he held the position as head of the pecking order.

Like each of his “house mates,” he was quite the individual. He looked like your classic “black rat,” as seen in many horror movies, and this errie beauty was what attracted me to him in the first place.

Quite often, as we traveled to Melbourne City by train and Yrkoon stuck his head out of the front of my shirt, there would be gasps and exclamations of fright. He was one sure way of clearing a comfortable space around myself when travelling home on a crowded train. To comments like, “Yuk. Where did you get that,” I’d reply, “From a drain. I saw him sitting there and just put out my hand and let him crawl on me.” To the more polite quiries, I was enthusiastic about sharing conversation—either about pet rats or Yrkoon himself.

Yet, he also endeared himself to children who would watch him from their seats, often asking their parents, “What’s that crawling on the lady?” (the common answer was “a mouse” or “a big mouse”) or “Can I pat it, mum?” Despite the, “I’m not so sure,” look of repulsion most of these parents gave Yrkoon, they were happy after my reassurance to let their children pat him at least.

I was more than willing to let Yrkoon meet humans of all kinds, as he was as curious about them as they were of him. Yrkoon and I would show them how I could hold the smallest crumb of food between my fingers, and he would take it so carefully with not even the brush of his teeth against my skin. And for those whose stomachs I thought could handle it, I also showed them how Yrkoon would take food from my mouth.

He was a gentle giant, and this soft hearted nature was also reflected in how he treated his fellow rats that lived with him. Rats have a pecking order within their colony, like most animals and humans do. Yrkoon was the boss of the house, yet he was no aggressor nor did he harm any of his companions. He protected them.

When I moved their hutch to my parents in Ringwood, the family dog, Bianca (a Staffordshire Bull Terrier X Kelpie) met rats for the first time. None of these rats had ever met a dog before. Gangrel, my sleek Black Hooded boy, was climbing the wire of the hutch and caught Bianca’s attention. Running over to the hutch, Bianca sniffed it once. This caught Yrkoon’s attention as he fed on seeds nearby. Bianca then snapped at Gangrel who had stuck his head out to greet her. In that second, I watched as Yrkoon pounced up to Gangrel’s level on the wire, swatted his friend back to the hutch floor (I could almost hear him say, “Get out of the way boy and let me deal with this.”), and then fixed his big yellow teeth on Bianca’s nose. With a startled yelp, Bianca pulled back and retreated from the hutch. Yrkoon hung on the wire for some time afterward, and I swear he was laughing at her.

I could always leave a spare set of house keys with the boys, knowing that Yrkoon was not too kindly with strangers reaching into his house. Though he was friendly, only I was allowed to remove him from his hutch. This was the only time he bit other humans. So, I knew I could trust him with my keys; however, he’d chew his ratty signature into my key rings.

Yrkoon would go to the feed bowl every mealtime and proceed to remove items of food and take them back to the nesting box. In here was where my more shy rescued boys would spend a lot of their time hiding. Now, I guess you could call this hoarding except that Yrkoon didn’t seem to care what happened to his treasures. He never guarded it, he never fought for it, he never stole it back. It in fact looked as if he would take the food to his waiting companions, then, once they had enough, he returned to what was left in the bowl and fed himself there.

Yrkoon showed me and my friends that rats are just as capable of loyalty, consideration, and compassion towards their fellow species. More so than some humans are to our own. 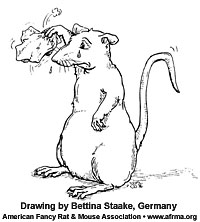 The fact he would guard my keys like a well-trained dog would its property, fearlessly protect his companion, yet tolerate the sometimes rough handling of human children, proved just how intelligent rats are.

He passed away wrapped in a little towel, lying on a tree stump in the garden. It was a sunny day on an early afternoon. His breathing simply grew slower and slower as I prayed next to him for God to take another little soul to peace. Yrkoon was blessed with two years of health and adventures and was blessed with a peaceful passing to the next life.

He was a true noble king amongst his people.