This article is from the July/Aug 1996 AFRMA Rat & Mouse Tales news-magazine.

Recently I have had a number of requests for information on rat genetics. While there is quite a bit of very good information out there, none of it covers the more recent colors which are so popular with AFRMA members. Because of the interest in breeding these colors I have repeatedly been asked for my opinion on their genetics, therefore I will attempt to cover these to the best of my abilities.

I am not a geneticist, just a hobbyist with a particular interest in this aspect of the rat fancy. I have based this article on the writings of other authors (in particular those of Ann Storey and Nick Mays) and I highly recommend you reading their original works. Unfortunately, most of the more recent colors which have appeared in AFRMA breeders’ stock have not yet made their way to the U.K., and those authors who know the most about this topic have not had the opportunity to work with them. These new colors have not appeared in any of the scientific literature that I have been able to find (please let me know if they have, my genetics resources are very limited.) The information I am presenting on the newer colors is based on my own theories, as well as those of other breeders, and is at best an educated guess which may well change as we get more information. I will denote these with a * whenever I talk about them.

Genetics is not some mystical system for predicting the color of animals, nor is it an elaborate mathematical equation which can only be solved by a brilliant scientist. Instead it is a straightforward way of finding out the likely results of breeding two animals of known or suspected background.

In this article I am not going to go into the mechanics of how genetics work, because it has already been done quite a few times by people who are much more knowledgeable (and better writers) than I will ever be. Instead I will be discussing the specific loci involved in determining the colors, markings, coat types, and other features we recognize in fancy rats. I recommend that anyone who does not already understand how genetics work, or anyone who needs a brush up on the topic, read Nick Mays’ book The Proper Care of Fancy Rats, pp. 226–236 before going any further.

A rat’s color is caused by the pigment in its hair. There are two basic pigments, eumelanin which causes black/brown color, and phaeomelanin which causes yellow/red color. The distribution and density of these two pigments throughout a rat’s coat is what causes it to be a particular color.

The distribution and density of pigment in a rat’s coat is dictated by various genes. The position which these genes occupy on the chromosome is called its locus. Each locus is responsible for a distinctive effect on the pigment in the coat, and all the loci taken together “spell out” what the rat will look like.

Polygenes are also important to be aware of. These “modifying genes” cause all the variations of each color. They make the difference between a good black and a bad black, determine the amount of white on our marked animals, and control the amount of silvering. Once you breed a color you then select for the correct shade of that color, and in doing so you are selecting for the combination of polygenes you want.

The Agouti locus controls the distribution of yellow pigment throughout the coat.

AA and Aa animals have a band of yellow near the top of each hair, thus giving the hair a striped appearance. This causes the agouti effect and can be seen on Agoutis, Cinnamons, and Blue Agoutis (and others). aa animals are non Agouti (self) and have hairs which are solid colored (no band). These animals include Black, Chocolate, Blue, Champagne, and Lilac.

This locus simply determines whether eumelanin is black or brown.

B causes eumelanin pigment in an animal’s coat to be black. We see this in Agouti and Black animals.

bb animals are brown, a color we call Chocolate. Chocolate is recessive to Black, and as babies they are very distinct when compared with their Black littermates. Unfortunately, Chocolate varies immensely, and dark ones often look like poor Blacks as adults. Chocolate Agoutis are dark Cinnamons who have chocolate for a base color, and are too dark to show. Chocolate Blues (bbdd and bbgg) are a very pretty silver color with no blue in it, a color AFRMA calls Platinum.

In other animals cchcch is chinchilla, basically an Agouti animal with the brown in its coat diluted to cream or white. AFRMA currently has an animal in its Standards which fits this description (Chinchilla*); however, in recent years few have been bred. I am placing them here based on their appearance rather than any genetic evidence, and I am very interested in hearing from anyone who breeds this color. If this truly is Chinchilla, it opens up a whole realm of possibilities, like Blue Chinchilla and Sable Siamese. This gene appears to be linked with the Berkshire gene, and Chinchillas are often very good Blaze Berkshires. Those who were around when this color first appeared say that it brought with it Lynx, so the two may be related. Some of these animals have been exported to England, and in the November/December ’95 Number 90 issue of Pro-Rat-A, Ann Storey reports that “It (cch) has a slight bleaching effect on black. This gene appears incompletely dominant to C. AACcch rats resemble bleached and color-paled Agoutis and aaCcch are poor blacks.” 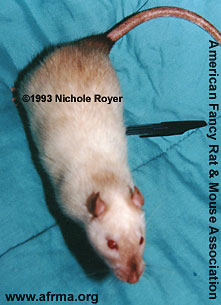 chch causes yellow pigment to disappear, and dilutes black to a warm brown. It also causes acromelanism (fancy name for the Siamese pattern). This pattern is created because the color of this animal’s fur is determined by the temperature. The cooler it is, the darker the fur grows; therefore, the extremities (ears, nose, feet, and tail) are dark, and the rest of the body is light. Currently we have Seal Point Siamese (aaBBchch) a beige rat with sepia points; Blue Point Siamese* (aaBBchchgg), ivory with light blue points; and Russian Blue Point Siamese* (aaBBchchdd), gray with dark blue points. Potentially almost any non-yellow color could be combined with Siamese. Because yellow completely disappears, we can never create Fawn Point Siamese (in cats this would be Flame Point).

In cc animals, both yellow and black pigment is completely diluted. Since both pigments are eliminated, this animal appears white with pink eyes, an albino. Albino animals do carry other colors, though we don’t see them because all the pigment is gone, and depending on what alleles they have at the other loci, they can produce any other color.

This locus causes pigment to be globbed together in big clumps instead of being distributed in the normal, even manner. This lightens the appearance of the color despite the fact that there is actually more pigment in each hair. The pigment in these animals usually gathers at the base of the hair, and the tips tend to be light, which gives a ticked/silvered effect.

dd animals, on a black background, are what AFRMA calls Russian Blue*. These animals are very close in color to Blue mice or Russian Blue cats. In many other animals this is the only locus that causes a blue color, but in rats we appear to have two separate blues—Russian Blue and Blue* (I will deal with Blue next). This is a new color so there hasn’t been much experimenting but Russian Blue Point Siamese* has been created (very pretty) and it is possible that Silver Blue* may be created by combining Russian Blue and Blue. Russian Blue originally appeared out of breedings for Velvet-furred rats.

Don’t go looking for this one in the genetics books, I made it up. To all appearances we have two loci that produce a blue color in rats. Multiple blue genes have been reported in hamsters and mice, but not in rats to my knowledge. (If anyone knows of further information on multiple blue genes in single species of animals, please let me know.) Our Russian Blue corresponds best to the “Maltese” blue in other animals, which leaves the genetics of our Blues in question. I do not know what exactly this locus does to pigment, other than diluting black to a blue-gray.

aaBBgg animals are a very pretty, even, gray color which can range from very light to very dark, a trait which it shares with Mink/Lilac. AFRMA standardized the darkest shade and calls it Blue while the lightest shade is called Powder Blue (unstandardized) and the medium shade is referred to as Sky Blue (unstandardized). gg has also been combined with Agouti creating Blue Agouti. These animals have the black band in their fur diluted to blue, but there is little or no effect on the yellow band, creating a very pretty combination. Blue has also been crossed with Siamese and the resulting Blue Point Siamese are a very light ivory with pale blue points. It is interesting to note that in the U.K. there have been many major health and temperament problems reported in their Blues. In the U.S. this does not appear to be the case, though many of our Blues do tend to be overly sensitive to fat/protein in their diet and there have been some problems with scabs. It is proving fairly easy to breed this problem out, and it responds well to simple selection.

(Because “Russian Blue” corresponds more closely to the blues in other animals which are labeled D I put it there and created a new place for “Blue.” In Ann Storey’s article, “Blue” is represented as D.)