This article is from the Spring 2003 AFRMA Rat & Mouse Tales news-magazine.

Music Review: The Rat On My Piano 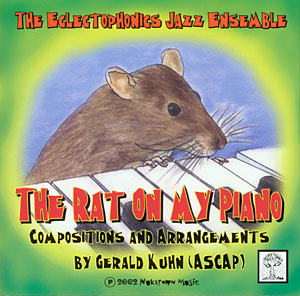 My husband plays saxophone in a 1940s style big band, and recently he brought home a CD he’d purchased from a fellow band member Gerry Kuhn. Since he’s always bringing home CDs, I usually don’t pay much attention to his acquisitions, but I noticed that there was a wonderful drawing of a rat on this CD cover.

“There’s a rat on the cover of that CD!” I exclaimed. “Yes,” he smiled, “it’s called ‘The Rat On My Piano’ and was recorded by arranger, composer, trombonist Gerry Kuhn of Pasadena.”

I knew that Gerry had an elderly agouti rat named Sissy, as he’d once asked me for advice about a medical problem she was having. I was surprised to learn that he’d dedicated a CD to Sissy and was eager to hear it, after learning that this musically gifted rat actually created some of the tunes herself.

The CD’s liner notes read: “A rat on my piano? Yup! That’s absolutely true. She wrote two of the songs on this CD, and inspired a third. Whilst running across my piano, Sissy (the rat) wrote the themes for ‘Phil’s Request’ and ‘7&2.’ In the process of stealing more musical ideas from her, I accidentally wrote the title tune. My little friend was my greatest inspiration. But, alas, she died on the afternoon of June 20, 2002, at the ripe old age of 3 years and 2 months. Her last words were, “Where are my royalties?”

Gerry recorded the CD in December 2001 with his nine-piece 1930s style band “The Eclectophonics Jazz Ensemble.” He orchestrated all the arrangements for “The Rat On My Piano” CD, which also includes standards like “Bewitched, Bothered and Bewildered,” “I’ve Got The World On A String,” “Watermelon Man,” “Willow Weep For Me” and ten other songs. My favorite Sissy tune “7&2” is a flowing upbeat instrumental piece featuring flute solos, swinging vibes, and a Latin beat that will set your whiskers twitching! The “Rat On My Piano” CD can be purchased by visiting web site http://www.cdbaby.com/cd/eclectophonics. 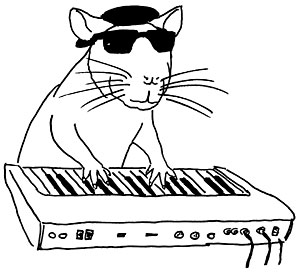 Gerry shared that he’d first gotten interested in rats back in 1992 when he was teaching school and decided to get rats for his classroom. Sissy came from a subsequent litter in 1999. “Sissy showed tremendous curiosity and ability to learn” added Gerry. “She had full freedom in my house. She would not chew up wiring, so she even went into my recording studio. She used to run across my piano to get to her cage and sometimes played very interesting music. I didn’t record any of this until I realized she was getting old and wouldn’t be doing if for much longer. I could go on for hours telling funny stories of hide-and-seek and the likes, but that’s for some other time.”

Gerry has started a children’s book about Sissy and hopes to finish it in the near future.