This article is from the Nov./Dec. 1996 AFRMA Rat & Mouse Tales news-magazine.

The idea was planted at the October board meeting. Nichole and Karen came up with the idea of a bunch of us driving up to Pleasant Hill for the Rat, Mouse and Hamster Fanciers show on November 16. Having shown dogs for the last 25 years and done a lot of weekending away from home, this didn’t seem like a far fetched idea. We contacted the usual bunch of showing members, but only Karen, Nichole, and I were able to make the trip. I did some vacation time rearranging in order to be off the Friday before and the Monday after to recover.

The First Leg Of The Journey 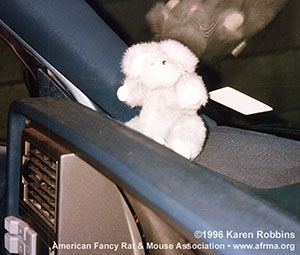 Friday morning I packed, got the mice that I was taking ready, and groomed my Shelties. I loaded the car and made the first leg of the journey: to Karen’s by mid-afternoon to avoid the L.A. Friday traffic. Our plan was to be at Nichole’s by 5:00 and have her stuff loaded into the truck by the time she got home from work. Here, we ran into a snafu. Karen’s truck had been in the shop since the morning before, and at 3:30 P.M. still wasn’t ready. I started to wonder how we were going to fit everything we needed to take into my little Mazda. The truck was finally ready and we loaded bag, baggage, critters, and Squeaky The Stuffed Mouse—official mascot of the trip, then off to Nichole’s where we stuffed ourselves with pizza and chocolate chip cookies. We finally hit the road at 8 P.M. We drove straight through and arrived in Pleasant Hill about 1 A.M. As we pulled off the off-ramp and in keeping with my priorities, I noticed a mall on the other side of the street. I said, “Look, a mall! This place is civilized.”

We checked into our room and played Chinese fire drill getting the critters unloaded. The first thing we noticed about the room was the nice wire shelving unit in the closet—perfect for putting mouse cages on. Karen also lined the closet floor with cardboard in case of an accidental cage leaking. She had brought a bag of Sani-Chips®, and as it turned out, one of the cages did need to be changed when we got there. We wondered what the housekeeping staff would think about that “funny looking stuff” in the wastebasket.

We arrived at the show before any of the RMHF members arrived. The show was held in the front part of the local feed store that wasn’t open yet. Finally, a few members arrived, the store opened, and we watched them start to set up. Nichole felt guilty and thought we should help them set up. I said, “We’re on vacation.” As it turned out, we had more stuff to unload than they did, and they were finished unloading before we were.

The show was more informal than ours. The judging took place on some folding tables, and the animals were shown in plastic carriers. The club did order show boxes from us that we brought up with us. They also had a table set up where all the sales animals were displayed. We had gone up with the intention of buying some Red mice and anything else unusual or different from what we have down here. I wanted to see the Dumbo rats I had heard so much about. The first thing that caught my eye were some pearl dwarf hamsters. I have had dwarf hamsters that I had bought at a pet store whose temperaments left much to be desired. These guys, however, walked right up into my hand. I knew I was getting hooked. The color is a silvery white with a dark dorsal stripe and light agouti patches around the ears. I needed to get into dwarf hamsters like I need a hole in my head, but I was taken with them, so I bought the pair. We also brought back Red and Siamese mice.


The judging got under way. As a new mouse judge, I was very interested in seeing a whole new judging procedure. The judging order is different from ours. They do the Satins first, then the Standards, then the Unstandardized. I had brought all females to show and was totally outclassed by Karen’s big males. We learned a couple of new terms, “over conditioned”—too fat and “under conditioned”—too thin. Nichole took Best In Show with her Beige Fox Satin, and Karen got Best Standard with one of her pink-eyed White males, Best Opposite Satin with a pink-eyed White male, and Best Shaded with her Blue Point Siamese, who I might add beat my two-time Best in Show Blue Point Siamese, “RN Blooper.” As in showing any animal, what wins one day under one judge may well lose the next day under a different judge. I didn’t get to watch any of the rat judging, I was too taken up with watching the judging of P.E. White mice. I did see some of the hamster judging. Show hamsters look like a totally different species than what we see in pet shops down here. They’re HUGE—almost as big as a female rat. My thought was, “Those are what Habitrails are designed for?”

We returned to the motel and had a repeat of the Chinese fire drill of unloading critters, with the added challenge of avoiding the cleaning staff. Pets were allowed there with a deposit, but we weren’t sure if they would consider “vermin” as pets. We covered cages with our jackets and made several trips back and forth from the truck to the room. Anyone watching would have to wonder why we kept bringing the same bundle of jackets back from the truck.

We spent the next couple of hours going over our judge’s cards and discussing the judging in general. We finally decided to go out to eat. We just needed to decide what to eat. It was raining by then. We stopped at one place, but while trying to find a place to park, an ambulance and fire truck came up to the entrance. We decided to look elsewhere. We went to another area, parked, and had to decide between Mexican and seafood. Since we were closer to the seafood place and it was pouring, the seafood won out.

The next morning we loaded the truck, again avoiding the housekeeping staff. The supply room was just down the hall from us, so this made loading quite an adventure. After we got all the critters loaded and took a last look around the room, with my back to the supply room and anyone who happened to be looking, I put on my AFRMA sweatshirt. Smooth move. Any guesses now to what we were loading and unloading? We headed out to get gas and do some shopping. We stopped at PETsMART (I live 2 miles from one) and Petco (you never know what you might find; Marbles, Lorry Bowker’s tri-merle came from a pet shop), then on to the mall I spotted early Saturday morning. We were three people on a quest for mousey paraphernalia. At the Hallmark store I found a terry cloth striped stuffed mouse (“look, he’s a brindle”) that I bought as a friend for Squeaky, who was now riding on the dashboard. Karen got a Christmas ornament. At another store we found a big selection of various mouse figurines. I settled on a mouse in a bubble bath waterball. Nichole picked up a set of footprint stamps. I almost made her ride home in the back of the truck when she got out the mouse footprint stamp and stamped them all over her hand.

We had a late lunch at the Sizzler, then hit the road for the trip home. I tried clicking my heels together three times and saying, “There’s no place like home,” but I guess that only works with ruby slippers.