This article is from the Spring 1999 AFRMA Rat & Mouse Tales news-magazine.

Sheila Sowter, England
Ienclose a photograph of a Robert-type and a Baldie, also a draft standard. The Baldie shows fairly typical markings clearly but the Robert-type is only recognisable if you know what to look for.


I asked Eric Jukes of the London and Southern Counties Mouse and Rat Club (LSCMRC) to take some photographs of a Robert-type and he took a number which can be put straight into a computer. He might have put them on the LSCMRC web site (www.miceandrats.com).

I could send you some Roberts for interbreeding with the ones you think are similar. What do you think of the idea?


These are the draft standards I wrote for showing in the “unstandardised” class in the National Fancy Rat Society:


Belly white with no stray spots of colour. Colour to shade up the sides from the white belly gradually becoming more intense nearer the spine which should be full colour. White nose tip. Head spot essential preferably diamond shaped. Colour any, not necessarily a standard colour since the “Robert gene” affects colour as well as pattern.


Body white, colour on upper side of head and just behind ears only with boundary along the edge of the head (see sketch). A large white triangle with a stem pointing back between the ears should occupy as much as possible of the space from the eyes to between the ears. Colour any, not necessarily standard since the “Robert gene” affects colour as well as pattern. 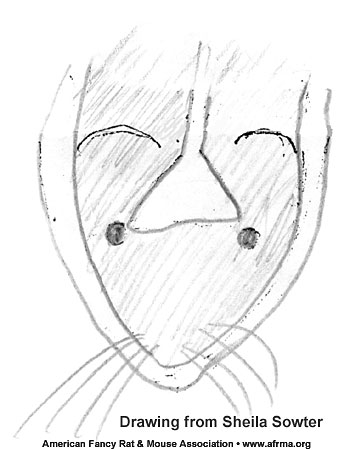 By Nichole Royer
Now and then we are asked questions about rat and mouse varieties that we have never seen or really have much information on. Robert Rats were one of those mysterious creature, and it wasn’t until an article on them appeared in the National Fancy Rat Society’s newsletter Pro-rat-a no. 99, pg. 10 (from England), that we really could even confirm they existed.

The first thing we noticed about these Robert Rats was their startling similarity in color to our Dalmatian rats. For those who have never seen or worked with Dalmatians, one of their distinctive characteristics is the fact that a dilution and silvering of their hair is always present. Another characteristic is the fact that along with Dalmatian babies, a typical litter also includes strange Berkshires with an excessive amount of silvering, lots of white markings on their heads, and often white running up high on their sides and even around their neck. From the information sent to us, it appears that Robert Rats also produce such Berkshires.

We are fairly confident that whatever the gene is that causes Dalmatian, it is it’s action on the Variegated marking that produces our Dalmatians. Robert rats are similar in appearance (particularly their front end) but lack the spots extending over their entire back side. Instead, they have little color on their backs, and it is confined to their spine area.

This made us wonder, could Robert Rats be caused by the same gene that causes Dalmatians, only acting on the Hooded marking instead of the Variegated? It certainly seems possible. Recently, I was given a description of a rat out of a Dalmatian/Hooded background that sounds identical to the descriptions we have of Robert Rats. This lends further evidence to suggest this might be the case.

Unfortunately, there is really no way of knowing if this is true, or if Robert Rats and Dalmatians are caused by something all together different. It would be very interesting to see Robert Rats in person, however, that isn’t likely since they are in England and none of us are able to go visit (much as we would LOVE to). It does give us something interesting to ponder, however, and one day someone will import a Robert Rat and we can solve the mystery.

Robert Rat articles appeared in Pro-Rat-A no. 99, pg. 10, the National Fancy Rat Society Journal, and The Daily Squeak, the Journal of the Blue Rat Support Group in England.