This article is from the Jan./Feb. 1995 AFRMA Rat & Mouse Tales news-magazine.

As a volunteer at the Marin Humane Society, one of my duties is to socialize the small caged pets. Of course, the rats are my favorite. and I have since become known as the Rat Lady. When two sweet girls came up for adoption, I couldn’t resist them. I am usually able to fight the urge to adopt every rat that comes through, however, at the time, I had only one pet rat at home and I felt our household needed more!

My concern was that the girls were not related in any way and had lived in separate households. The question came up whether they could learn to get along and live together. I decided to give it a try. I had some success before with other female rats and I had reason to believe these girls would work together. Slowly, but surely, Margarita and Molly learned to get along. And now, they are the best of friends!

About two months after Margarita and Molly moved in. I was presented with a situation whereby I inherited a male rat. Rickey. Normally, I do not keep boy rats because I like to let my rats run around the room and I don’t like to worry about boys and girls together (I don’t have enough room for the results of such play!)

Nevertheless, because Rickey wasn’t working out well in the kindergarten class where he was placed, if I didn’t save him, he would have been put down. He began nipping at the children and when I visited his site, I saw why! He was living in a cage way too small, he was being fed hamster food, and he had no shavings at all in his cage! The children were too young to handle a rat in the classroom and they kept sticking their fingers in Rickey’s cage. No wonder be nipped - he thought those tasty fingers were food!

I figured if I was going to have a boy in the house, then he was going to meet the same fate that our dog and cat bad before him...he was going to be fixed! Besides the obvious advantage of being able to play with the girls safely. I thought it would help his “aggressive” behavior. With the help of our local vet who specializes in neutering male rats, Rickey underwent “the knife.” The procedure is relatively simple and the recovery period is about a week to ten days. And to this day, Rickey has never bitten a soul! He is a sweet boy, who is still a bit shy, probably “traumatized” from his early days in a kindergarten class.

However, he did seem a bit lonely in his own cage. (The girls had one cage to themselves and Rickey had his own quarters.) Thus I kept an eye out for another roommate for Rickey. It wasn’t too long before Tweakers came into our lives. He had been earmarked for doom by the Kennel Supervisor who thought there was a threat of a virus running through the rat colony. Tweakers didn’t appear ill and I couldn’t let him meet his end so soon.

But of course, socializing two unrelated males together is nearly impossible! They can be way too aggressive and territorial. But I thought if both Rickey and Tweakers were “fixed,” perhaps they had a chance of getting along. After Tweakers had recovered from his operation, I began introducing my two boys. A few minutes at a time, in a neutral territory (the sofa) seemed to be okay. We increased the time they spent on the sofa together each time, so they would get to know each other.

By the end of week, I felt ready to introduce them into the same cage. After cleaning the cage extremely well with all new bedding, towels and boxes for each, they were ready. I held my breath. I watched them consistently for several hours. They did exhibit some normal aggressive behavior, but nothing that lasted too long or seemed too dangerous for either one. So far, so good. I felt that it was going pretty well. Until I would hear squeals from their cage and then I would fly into their room to break up the squabble. But after a couple of weeks, even these squabbles diminished. I felt relieved...the boys were getting along great. 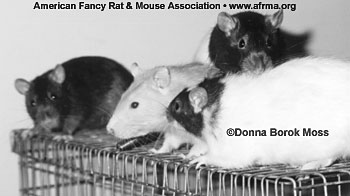 Now, how would the boys and girls all get along together? I opened the doors to both cages, and Margarita and Molly were anxious to go explore their next door neighbors. They are able to crawl out of their cage and into the boys’ cage. Likewise, the boys can go into the girls’ cage...but they don’t seem as anxious to do so. They’re perfectly happy to let the girls come over and visit them! Boys! Now all four rats get along great. When they can, they will eat together and even nap together. Molly’s favorite game is to steal the boys’ food and take it back to her own quarters.

I had hoped that all the rats would get along. but I never expected it would be quite as easy as it really was. I’ve had some rats in the past who just never learned to get along with other rats and it always seemed a shame. Now I have a very happy family who get along, and what more could a mother ask for!