This article is from the Win-Spr 2018 AFRMA Rat & Mouse Tales news-magazine.

We generally hand breed most of our rats. This means the females are visually examined to see which ones are in season. The female is paired with the male for 1 night at the most.

In this specific case, the female was paired with the male for 20 minutes before going back to their home cages. The female displayed courtship behaviors and was fully receptive to the male for about the first 17 minutes. After, she was not receptive and did not want any more contact with the male. The female chose when to be done with breeding and would push the male away and vocalize her displeasure.

The photos are of the female pre and post breeding. In the left photo, you can see that her vaginal canal is open. That indicates the female is in estrus. This is normally closed when the female is not in heat. The right photo is of the female with a vaginal plug after mating. The plug, also known as sperm plug, is produced by the male. It gives sperm increased time to fertilize eggs by sealing the vaginal opening for a short time. 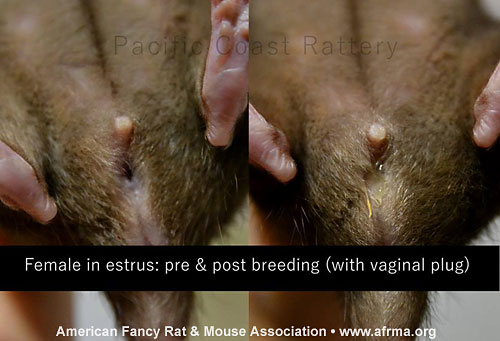