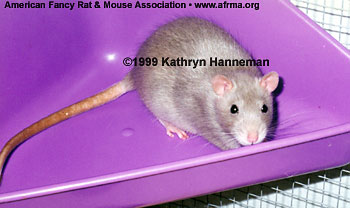 Ifixed dinner like I do every night for my ratties—veggies, cottage cheese, fruit, and I had decided to give them soy beans. (I’m giving Claudia lots of soy for the small tumors she has.) I checked the beans and although hard, I could still bite into them. I thought as they ate these, the beans would also be good for their teeth.

About 10 minutes later I went to see if everyone was done with dinner and that’s when I saw Tinka in a panic trying to gag something up. I then tried opening her mouth to see if I could see anything and saw nothing. I then put my pinky nail down there and got a couple of chunks of bean. By this time Tinka was pretty limp and still gasping for air.

I then took her upstairs where I had Debbie Ducommun’s Rat Health Care booklet and went to the page where it talks about choking. The first thing I did was the Heimlich. Tinka was trying to help get it up, but no luck. I was in a little bit of a panic, crying, and did not quite understand Debbie’s other procedure of the centrifugal force method, so my husband performed that one. Tinka then seemed to be getting more air.

I then called my emergency pet hospital and the first thing they said was do the Heimlich which I said I did. They then said for me to put Tinka on her back and do the Heimlich. They said there is really nothing else that I could do for her, just let her relax and maybe it would pass since she was getting some air.

Webers To The Rescue

Tinka was now laying in her cage as limp as could be, not moving and gasping for air. I called the hospital back and told them what she was doing and was there anything else I could possibly do for her. The doctor then suggested giving her small pieces of bread, saying that it might help push the bean down. I gave Tinka a very small piece and she was very quick to take it and eat it, but she was still flat on her tummy limp. I left her alone for awhile, then offered her another piece of bread. She took it and ate that piece too. The doctor then said to just leave her alone and that’s all I could do at this point. I put all the other rats in another cage except her sister Mina. I checked on her a little while later.

It was now 4:00 in the morning and Tinka was curled up with Mina, looking very exhausted but breathing better. Tinka’s fur was very fluffed while all this was going on, I guess trying to keep warm. I left them alone for the rest of the night and first thing in the morning I checked on her.

I walked into the room and she was still curled up next to her sister. Tinka then jumped up, climbed up the ladder, and wanted out! I don’t know if it was the bread that helped or just leaving her alone to relax and let it pass knowing I did everything I could to help her. This all happened in a period of 4 hours. Tinka was up and about the next day; her fur stayed fluffed for awhile and her eyes very droopy. It is now a few weeks later and Tinka is fine!!

I had never had anything like this happen before and saw for the first time how the other rats reacted to a situation like this. Before I took the other rats out, Lestat was going up to Tinka trying to pull at her neck and get into her mouth with all the others doing the same. Then the saddest thing happened, Lestat climbed on her back and just laid there, I guess to help keep her warm. That’s when I took everyone out of the cage except her sister. I just wanted her to be able to relax. I believe that was a good thing to do. Thanks to Debbie, and thanks to Brooke at the emergency clinic.