This article is from the Fall 2003 AFRMA Rat & Mouse Tales news-magazine. 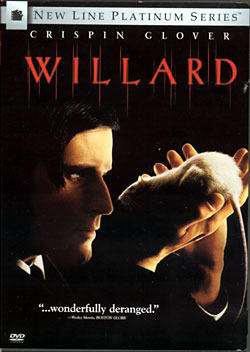 We didn’t critique the movie when it first came out because most of us had seen the original, and we didn’t think much had changed storywise. Since Rat & Mouse Tales is read by a select (and might I add very intelligent) audience, we knew, if you chose to see the movie, you could mentally eliminate the Hollywoodeze from the truth about our rodent buddies.

For the sake of those of you who do not know if they want to see the movie or not, I offer my humble opinion and some of the opinions of those who made the movie.

First, let me say, this movie was meant to be a campy, black comedy/horror film. For those who did not see the first Willard, there were some definite changes. This new Willard, played by Crispin Glover, took on a darker, more sinister look than did his wavy, toe-headed predecessor, Bruce Davidson. Willard the First, (we’ll call him) wasn’t nearly as menacing. He somewhat evoked a little sympathy from the audience as an orphaned, dorky computer nerd (well, if there had been computers back then). You can see, Willard the Second, is pathetically sinister from the get-go and throughout the movie. I never had a clear opinion of him, other than he was a very confused young man that was always having hissy fits. But, still smart enough to choose a rat as his best friend.

We were assured there were no animals injured or abused during the filming of the movie. I am willing to accept this as truth as I’m sure you have read the article in our newsletter of when Carol Lawton and I toured the training facility (see the Spring 2003 issue, pg. 6, Ed.). Computer generated images (cgi) and animatronics made it possible for scenes to be shot that look very (and I mean very) real, yet no animals were harmed. Even though I knew Socrates (the white rat) was never injured, the scene in the movie where he was being poked with a stick made my heart hurt.

In the first 30 seconds of the movie, you will see a total disregard of accuracy. These rats needed to be oiled, they squeaked. Well, I guess the director had to maintain the public image of the rat. We know rats squeak only when hurt or distressed. These rats had the run of the house and in no way were distressed. So much for Hollywood. One element throughout the movie that was consistently accurate was “rat poop.” There was no lack of rat poop. I’m sure this item of reality was wasted on the general audience, but this was indeed accurate.

After the death of Willard’s mother, the only human friend Willard seems to have, comes to his front door. Cat, (get it? Cat?) is at his front door with the big orange tabby in her arms. Cat, the girl, brings Willard this cat because after the death of her mother, a cat was her companion and it brought her comfort. Willard quickly squeezes out the front door so that Cat, the girl, cannot see into nor enter the house. At this point, Socrates is in Willard’s pocket and is reacting to this monster cat that has been thrust upon our unsuspecting Willard. Willard can’t invite Cat (the girl) into his house as he seems uncomfortable around her and besides, the house is overrun by rats. So, how does our “campy hero” handle this unwanted cat? He opens the door and tosses this unsuspecting cat (the real cat) into a room filled with CGI rats. The cat sees he is about to be turned into cat paté so it jumps onto an arm chair and hits the television remote control. The cat’s paw hits the remote “just right” so that across the television screen you can read “channel 911, Easy Listening.” With this, you hear Michael Jackson singing Ben. This had to be my favorite part of the movie. It was so corny.

Socrates, the white rat that Willard truly adores, still takes orders from Ben. There is a power struggle throughout the movie between Willard and Ben. This time, Ben is played by one of several African Pouched Rats.

Please, do not start asking where you can get one. These rats were handled by experts and even the experts didn’t always know how these African rats would react. Unlike the animals we are so used to, these rats are solitary animals and very territorial. You would sustain a nasty bite if you tried to tried to put your hand into its cage. They don’t particularly love interacting with humans and do not make good pets. We all know there are people who currently have or have had one, but please don’t think you can turn one of these into a pet. They have never been domesticated and won’t be, if that is what you are thinking.They are larger than our domestic animals and they live about 6 years. Six years is a long time for a wild animal to have to live in a small cage alone (even a large cage is too small).

Maybe I had too much time on my hands, but after watching the movie, I watched the version where the producer, director, and actors are talking about each scene and what they were trying to accomplish. I found this version to be more entertaining than the movie. This movie is full of spoofs and obscure references that you won’t pick up unless you watch this second version. This is a movie you watch very closely to catch all the subtle jokes.

As people who extol the praises of an animal that society deems a curse, we have had to maintain extreme patience with the unenlightened and the uninitiated. This is no different, but if you have a sense of humor and like campy, cult movies, you may find a chuckle or two. As the credits are running at the end of the movie, you get to hear Crispin Glover sing the theme song, Ben. He’s no Michael Jackson, but who is?