This article is from the Summer II 1997 AFRMA Rat & Mouse Tales news-magazine.


BANDED is a relatively new variety with mice. According to NMC News of the British National Mouse Club, Banded was first introduced to the mouse fancy by Frank Ansell in 1988. The variety “popped up” in a laboratory after mating together two inbred strains of mice and it can be considered as being a spontaneous mutation. The laboratory findings were published in 1982. The gene responsible for Banded is closely related to Rumpwhite (Rw) and Variegated (Wv) and is called Sash (Wsh). The gene is dominant.

The Finnish standard says the following about Banded: 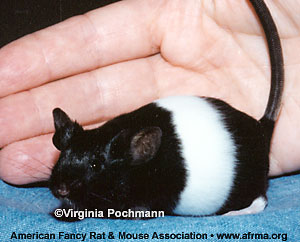 When breeding Banded you have to consider many aspects: markings should be even and sharp (on the belly, too!!!), colouring should be according to the standard, and of course the size and type should be good. With Tanned Bandeds you should also aim for a beautiful fiery belly colour. The greatest problem is how to combine all these characteristics into one single mouse.

The standard does not mention head or tail markings. However, the aim should be a Banded with a wholly coloured tail. You should not use a Banded with a head spot for further breeding, as these spots have the tendency to spread in future generations. It is also unwise to add extra pied-genes into your strain of Bandeds. The hind feet should be white to the middle of the foot from the toes to the hock, like in Dutch. With the front feet, the “hand” should be white. Hind feet are usually relatively well marked, while the front feet lack proper stops. Most usual faults with the band is a very uneven band on the back, that is, extra jags in the markings. On the belly the markings tend to either spread to the legs or break. There can also be coloured belly spots in the band.

The easiest way to get progress in breeding Banded, is to choose the best possible mice for breeding. If possible this should be by mating a good Banded to another one. You can correct the faults in the markings by mating together mice who have “the opposite faults.” That is, too wide a band to too narrow; broken band on the belly to too wide, and so on. You can affect the markings only by selective breeding, so you need sustained effort and plan your breeding long ahead. Winners aren’t born neither instantly nor without effort, and you should not get depressed by sudden draw-backs.

Mating two Bandeds together results with three kinds of babies: Bandeds, Selfs (in this connection meaning non-marked), and “charlies” (which is a “double-Banded,” with the band extremely wide). Mating a “charlie” to a Self, the whole litter will be Bandeds (at least in the principle—I’ve had litters consisting of mainly Selfs from this kind of mating.). As an outcross, you can use a Self without Banded ancestors, but this will rarely result with show quality Bandeds. These do suit well for further breeding with a Banded. Never mix other markings with Banded! In order to be able to plan your breeding and to follow how well you’re doing, you should keep good records. Preferably you should mark down all babies born, what is their quality, colour, markings and faults. It is of prime importance that you are able to have a critical eye with your mice, considering all their qualities, and choosing only the best for further breeding. As with other varieties, with Banded you should from time to time, use controlled and well-considered inbreeding.

A good Banded mouse does not consist of the markings alone. The colour should be like in the standards laid down for that particular colour, so in order to keep the colour good, you have to follow the proper breeding method of that colour. You will have little use (in showing and breeding sense!!) for a mouse whose markings are nearly perfect, but the colour is terrible. If you have to (to get better type or size, or to get the markings into a new colour), you can sometimes make a mating where the colours do not exactly match. This should be done only occasionally and with thorough consideration, as it takes several generations to get the colour right again. Good marked mice are so few that making bad combinations are wrong for the mouse fancy as a whole!

Is breeding Banded difficult? Well, after breeding them for 3½ years, I can say it isn’t terribly easy! There are relatively few show quality mice born when compared to many other varieties. My Banded breeding is heavily concentrated on Black Tan Banded, so there is the further difficulty of the Tan belly. It is easier to breed tanless Bandeds. I don’t try to scare you off from breeding marked mice—on the contrary! It would be wonderful to have plenty of Bandeds and other marked mice in shows and in a great variety of colours. You know, it is a great feeling to find a well-marked Banded in the nest. The suspension grows: Will the mouse grow up to be of a good size? Is the colour good? How are the belly markings...

Banded is now recognized in AFRMA.