This article is from the WSSF 2012 AFRMA Rat & Mouse Tales news-magazine.

Jes Waldrip, Facebook
QI just got my two little ratties, and I’m looking to improve their tank. How safe is it to put a few inches of dirt (organic, clean soil) and some rat-safe plants and make their tank a little terrarium of sorts?

AI wouldn’t recommend it. Rats will eat almost anything and it’s difficult to know what’s safe for them. If you want to give them some additional enrichment, I would suggest putting their tank on an open table filled with toys and ladders. That will give them additional play space and will keep them busy and happy. Carol Lawton

Emma Lee, Facebook
QI want to give my boys a dig box. What is the best kind of dirt or soil for rats to play in?

AClean potting soil that does not have harmful chemicals or bugs are what some people use. Other alternatives would be to use shredded paper, hay, or packing peanuts. Some articles on our web site with more on the subject: 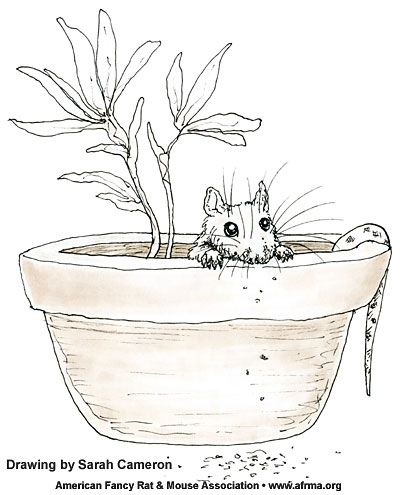 Alesa Loftis, Facebook
QI am trying without success to litter train my two new rats, but they are just not cooperating, any suggestions? I want them to have a hygienic home but so far I have to clean the cage every other day for that to happen. Right now I have newspaper and paper towels lining the aquarium and a box with the recycle paper bedding at one end. I put some of their droppings in there to encourage them.

AIs there one corner they seem to use as their bathroom? If so, then that is the corner you want to put the litter box in. Also, put the bits of paper they pee on in the litter box as well as their droppings. Usually you line the entire cage with the bedding, find the corner they like to use, and place a litter box there usually with a different type bedding like pellets. If you find they do their business on the newspaper/paper towel in one corner but won’t use the litter box placed there with the pellets, then perhaps using the papers in the litter box instead would help. Some use fleece to line the cage with while using litter boxes. You would need to wash the fleece every couple of days though as they will pee on it to mark it as their own and the buildup of ammonia on the fabric could cause respiratory issues. Karen Robbins