This article is from the Spring 1997 AFRMA Rat & Mouse Tales news-magazine.

Matthew Hauge (e-mail)
QI am a little bit out of practice when it comes to rats. It has been several years since I have had a great many of them, and the problem I have now is one that never came up.

The problem is this. For some reason my sister and I have become interested in breeding Hairless rats. We have acquired a Hairless male and a young Rex female. The problem is housing. We only have three rats, the two mentioned above, and an old Siamese female. The Siamese has been alone for a few years now and is not welcome to hands coming into her cage. Once we get her out, she’s not such a terror. We are caught between letting the Rex live with the Hairless, or the Siamese.

I’m worried about the Hairless and Rex breeding too soon, but I do not wish to house her with an old rat and leave the Hairless male alone. And a third cage is not really an option as they would both be alone. We do intend to handle them, but I still want them to have the company of another rat. Getting more rats is not an option either.

The people at the pet store say that the little Rex female (she’s only about 7 weeks old) will not breed until she is ready. I’m not sure I believe this.

At this point, I am not sure just how well the Siamese would get along with another rat. I am considering putting all three of them together in a cage, but am fearful of the damage she might inflict upon the Hairless male, and the Rex for that matter. In short, what are the chances that the Siamese’s solitary life has left her “insane” enough to be unsociable. I have introduced them in a neutral place with no ill effects, but then that’s how it always seemed. And of course, can a rat be too old to breed?

AYou are very right to question what the pet shop told you about your Rex getting pregnant. Female rats are sometimes capable of getting pregnant as early as 5 weeks of age. Needless to say, getting pregnant this young would be to the detriment of your female, likely to stunt her growth, and could well affect her health for the rest of her life. Also, if kept with your male, she would come into heat immediately after having her first litter, and you could expect her to produce a litter every 3 weeks or so. This would be an unfair and unhealthy situation to place your female in.

I also cannot recommend putting your older female in with your male. Usually after they are 1½ years old, female rats become infertile; however, there have been a number of cases where this has not happened and the older female ends up getting pregnant. Often, late pregnancies are fraught with complications and end in death for the female.

The only fair thing to do in this case is to try to house the two females together. I recommend getting both females out every night for a week to play together on neutral ground. At the end of the week clean out and set up your male’s cage to put the two females in. (Your male will be living in your female’s cage for a couple of weeks.) In this way you are putting both females into neutral territory. Once the tank is set up, put both females inside. They will squabble some, and this is normal. If you stop them from doing this, they will never properly sort out their social order, and will continue to have problems. If the older female attempts to do serious harm to the younger one (attempts at major injury, significant blood drawn), then you know this is not going to work out.

If the two females refuse to get along, it leaves you with only one choice, get a third cage. You will need one anyway when you breed the Rex, and you can always keep a female offspring as company for her mother.

Carmine H. DiSanto (e-mail)
QI have a pet rat. He was under the couch and I tried to get him. I grabbed his tail, he pulled away, and the bottom inch and a half of skin cover on his tail pulled off. I tried to clean it and put a bandage over it, but he pulled it off. Is there anything I can do to stop the bleeding and heal this? I am afraid he will bleed to death.

AI had this happen once. You should take him to your vet and have the vet do what is necessary to help the rat or call them and see what they say about treating it yourself.

You can try putting some ointment on the exposed part, but I don’t think he will leave it on—he’ll probably lick it off. Over several day’s time, the exposed part will eventually dry up and fall off and you will be left with a short-tailed rat. For the first couple of days it will be very painful for him, so I wouldn’t recommend taking him out and playing with him. I don’t think he will bleed to death. You could try putting some Kwick-Stop on the exposed part if it continues bleeding and doesn’t seem to stop. Karen Robbins

Daniel Cochran (e-mail)
QBoth my rat and I are itching. I checked through my dorm room for a source. Coming through my window were these tiny bugs nearly invisible to the naked eye. Moving my bed away from the window helped me, but they are all over the floor. Is there any way to kill these pests without hurting my pal Pokey? 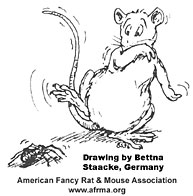 ASounds like you should take your pets and any plants out of your room and “bomb” the room to kill the bugs, then bathe your rat in a cat flea shampoo to kill any bugs on him. You might see if it would be possible to have the outside of your room sprayed. You might be able to just get the outside sprayed and then a spray or powder to do the inside of the room. In any event, you will need to do something to stop the bugs from coming in your room. Karen Robbins