This article is from the WSSF 2009 AFRMA Rat & Mouse Tales news-magazine.

The Tale of the Swamp Rat 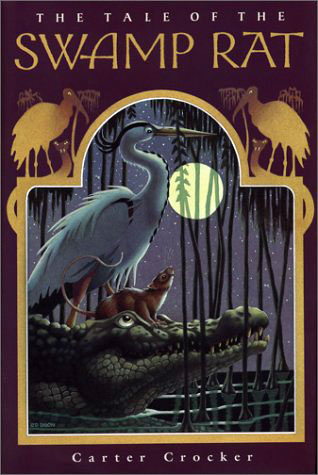 The old chestnut “don’t judge a book by its cover” never held much weight with me—and to this day I’m a sucker for any book with an appealing dust jacket. That was what reeled me in on The Tale of the Swamp Rat—though the fact that I sensed another “happy ratty” book for my classroom library had its weight, too. I wasn’t disappointed.

Narrated by a wise and well-connected mole, The Tale of the Swamp Rat is a novel aimed at young readers, but is enjoyable for any age group. Ossie, the title character, is the runt of his litter—a thinker and a dreamer, and, as the other characters say, “Not much for talkin’.” When he is orphaned by the attack of Mr. Took, “ . . . a rattlesnake like no other—so awful, so full of meanness, he doesn’t even believe a word out of his own mouth,” an injured Ossie is taken in by the legendary Uncle Will, an ancient twenty-five foot long alligator known by every resident of the swamp. Uncle Will nurses Ossie back to health, and sets about helping his charge make his place in the swamp community.

Unfortunately for Ossie, a foul-tempered and self-proclaimed prophet stork has set his eye on the young rat. As a drought assails the swamp and its denizens, Prophet Bubba decides that Ossie is the ideal scapegoat—he is the reason for the stretch of dryness, his very presence is an aberration, and the swamp will not be safe until he is driven out . . . or worse.

My students enjoyed this charming yarn with is vibrant characters and lilting down-home dialect—being from New England, the poetic drawl of the swamp folks was positively exotic to them. Adults will turn a wise eye to the underlying message: very nearly a fable, Swamp Rat has much to say, in a covert way, about the power of false prophets to steer the minds of those who don’t wish to think for themselves and about the tendency of so many to fear and hate those who are different than ourselves. The Tale of the Swamp Rat is a must-own for any rat lover, young or old, and is sure to be treasured by those who appreciate a good story, told by one who knows how to spin it.

About the Reviewer: Christina S. Vrba is a 6th grade reading and writing teacher who lives in New Milford, CT. Her four male rats—Trickster, Pippin (OSED Fool of a Took), Aspen, and Peeps (OSED Merlin Peeps) live in her classroom during the week, but come home on weekends and holidays.