Jackie Oppelt, NJ, e-mail
Q My daughter has a pet rat who was sold to us as “apricot.” She is a peachy-orange color on top with cream belly and pink eyes. At the time, I had no intention of breeding her, so I didn’t worry too much about the color or type. As time has passed though, we have decided to try to work with the color since it is really lovely. But AFRMA doesn’t have Apricot as a color. I’ve narrowed it down to Amber or Silver Fawn—I’m leaning toward saying she’s probably a Silver Fawn, as she’s more orange than yellow. I’m thinking that both Amber and Silver Fawn are genetically A- pp, maybe selected for different shades? Our Winnie appears to be the same, but maybe somewhere between the two shades. Could you offer an opinion/advice? I don’t know of any other animals of this color in our club—we have Fawns and Beiges, but nothing I recall with the pp base. So, if I’m going to work with it, I’ll have to work with what I’ve got. 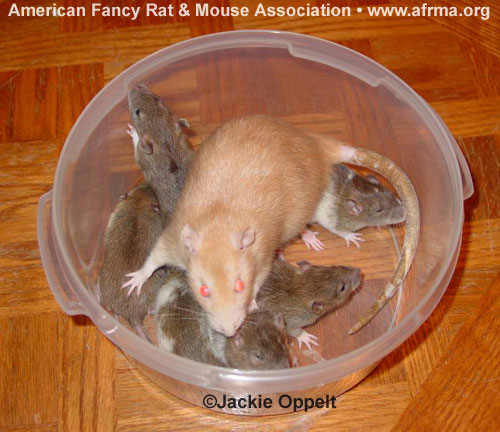 A Apricot is a color that Karla Barber came up with several years ago—a very dark orange Fawn with red eyes—no silvering. We don’t have a standard as there have never been enough shown to make one, and Karla is the only one working on them that I know of.


Amber is a very light Fawn with silvering and red eyes—basically a light Silver Fawn; no one has these now that I know of. They were around a long time ago before we had the Silver Fawn imports in 1983.

Silver Fawn are what we imported in 1983 from England, and I brought back two of them in May of 2004. They have red eyes and are a rich bright fawn/orange with lots of silvering. Genetically they are supposed to be red-eyed Agoutis and are silvered, although the female I brought back in 2004 was genetically a red-eyed Cinnamon that I found out in an outcross I did. When bred with a Cinnamon Pearl, she produced all Cinnamon or Silver Cinnamon babies instead of all Agoutis as expected. Supposedly from what I read in the N.F.R.S. literature, the Cinnamon version of Silver Fawn doesn’t come out as rich/bright of a color as the Agouti version. Looking at your photo, the rat looks like a red-eyed Fawn—a Fawn rat with red eyes instead of the dark ruby. Now if you wanted to work on the color and try to darken it and keep the red eyes, then you would make Apricot (according to Karla’s Apricot). I wouldn’t say the rat is Silver Fawn or Amber as I don’t see any silvering whatsoever. I’ve seen red-eyed Fawns before, as well as red-eyed Beige.