This article is from the WSSF 2011 AFRMA Rat & Mouse Tales news-magazine.

Michael Emerson, ME, e-mail
Q A friend, Rena, who is in the Netherlands, sent me pictures to ID the rats for him. I have not seen them before. The mother of the spotted ones was born out of a litter of his. He had never had anything like this before and figured it to be a new mutation—apparently the babies are spotted much better then the dam. I was hoping you might be able to ID them or give me some input on them. I know its hard to tell from photos. My thoughts were possibly Roan on the second rat. Thanks for your time and any information or input you might have to share.

A The “spotted” ones look like the Snowflakes that popped up in Helen Pembrook’s rattery in 2004. I know she sold them to other breeders but it is unlikely your friend’s rats are related. To me they look like Snowflakes but with a lot more spots than Helen was able to get on hers. Hers had the “spots” on the belly with just a few going up the sides of the rat.

As far as the one that looks like a Russian Blue Variegated, I’m not sure why it is so “ticked” so don’t know on that one. I know temperature fluctuations can cause color variations. Also, Variegated can vary with spots/splashes/“roaned” hairs. The color Roan starts out dark then turns lighter as they age and don’t come in a Variegated pattern. Since that one is a baby, they will have to send photos when it is grown up so I can see what it looks like then. 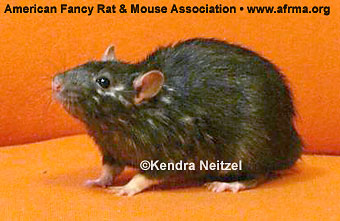 Q I have a quick question regarding one of my rat boy’s color. As a baby he was Black. His father was a homozygous Black Hooded and his mother a Merle. As the boy ages, he is developing white spots in his black coat. This is not silvering, but very distinct white spots—like the reverse of a Dalmatian. The pattern began around his eyes and is moving down his body. There is also some significant spotting showing up on his tummy. I kept him because of the weird pattern.

A Looks like Helen Pembrook’s Snowflakes. Hers were out of a Black Tailless male and mom was Hooded (Tailless carrier). They only had this spotting on the tummy and sides of the face. It seemed to be a simple recessive as her sibling to sibling breedings produced an entire litter but when outcrossing didn’t act that way, and dad to daughter didn’t produce any. Her original parents produced the entire litter of spotted rats when bred to each other. They showed their spotting around 6 weeks. She did sell them to other breeders and knows of one breeder in northern California where it popped up independently of hers.

Have you rebred the parents to see if you get more? Did you keep any siblings to this guy?

Martin Braak, facebook
Q This colour we call in Holland, Red. It is a recessive mutation or incomplete mutation. It can be combined with Himalayan and also with BES. Who knows if this mutation is registered?

This color is discovered by Rene Bastiaans. He saw it at a trader in Germany who told that he got some rats from a laboratory that he used for breeding and this color came out. We know at this moment that this mutation needs a c-mutation. We do not know for sure if it is on the c-locus or other locus. Some people say they have Himalayan and Siamese variation of the reds. It can also be combined with black eye, then only the eye is black same color. It is not Husky, but it can combined with Husky. The shape of the head is different then other colours.

A Very interesting color with that eye color! It reminds me a little of the Roan/Husky rats. [Update: Red=Red-Eyed Devil, called Marten in the N.F.R.S.