This article is from the WSSF 2011 AFRMA Rat & Mouse Tales news-magazine. 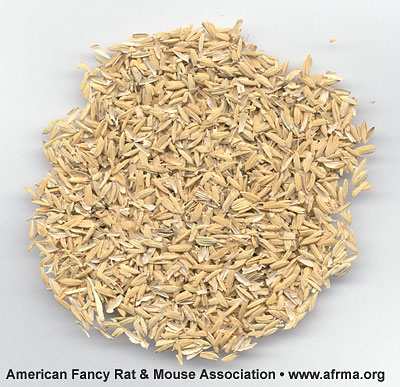 I use the Mallard Creek rice hulls and have been using them for about 6 months now, and I like them a lot for my rats and mice. The positive notes about the rice hulls are that they are organic and contain no oils or aromas. They are not too dusty and the rats and mice love them because they can dig into them like they would sand. I have not had issues with them eating the bedding but if they did, it would not be an issue since it’s just what comes off of the rice we eat. Another great perk is that they come in very large bags and only cost $8–$12 depending on where you get them from. Any feed store that carries horse supplies should be able to get them or possibly already have them. The downside to the rice hulls are that they do not do too much for odor control. They also are not super absorbent and tend to clump at the bottom so it makes cleaning not as easy but not too bad either. The major problem I have had with them is that they are not good for rats giving birth. This is due to the fact that the pieces are so small they stick to the babies really bad. I had lost a few babies to this before I realized what was happening. When I found the deceased babies, they were completely covered by the hulls. So, I use it on all rats and mice, just not rats about to give birth. I let them birth on another bedding. Once the babies are a few days old, however, the rice hulls are not an issue, and I have not had any issues with this in mice. Before Rice hulls, I was using aspen shavings. I became allergic to those and switched to Petsmart paper bedding but that was expensive. The rice hulls have to be changed once a week to every week and a half and refreshed once or twice between that to keep things nice and odor free. The more rats you have in a cage, the more often the bedding needs to be changed. The rice hulls have to be changed the same amount as the aspen shavings but more often than the paper bedding.