This article is from the WSSF 2006 AFRMA Rat & Mouse Tales news-magazine.

Thomas M. Donnelly, D.V.M., The Warren Institute, Ossining, NY
Q I am a specialist veterinarian in New York and see exotic pets, including many rats. A client has what she called “the blue line,” told me that she suspects this line has a hemophilia bleeding disorder because two of her rats bled to death (one from a cut on the foot; the other one unknown). I did not see the rats alive nor have an opportunity to necropsy them. I can have blood clotting tests run on her rats, but before I undertake this expensive procedure, I would greatly appreciate any feedback from you and the AFRMA if you have heard of any unusual diseases in any of the Blue rats (e.g. Russian Blue, Blue, etc.).

Marion Stier, Germany
Q My name is Marion Stier, and I’m a member of a German rat club. Actually, we have a discussion about Blue rats. Many people think there is a disposition for Blue rats to become ill (hemophilia, skin-problems, etc.). Unfortunately, nobody can tell me any details or has experience connected to this problem.

I’d appreciate any information about this problem because I’m going to write and publish an article in our little club newsletter.


I hope to get some information from you because I think you have more experience in this matter than the German people.

Answer to Blue Rats With Hemophilia and Blue Rat Bleeding Disorders by Carmen Jane Booth, D.V.M., Ph.D.
AIn answer to the question regarding abnormal bleeding in the Blue rats, the following is taken from Robbins The Pathologic Basis of Disease, 6th Edition by R. S. Cotran, V. Kuman, and T. Collins, 1999, WB Saunders Company, Chapters 5 and 14.

Abnormal bleeding can be caused by a number of different etiologies. To understand the different causes it is often helpful to first discuss how the body deals with the normal regulation and balance between keeping blood in a fluid, clot-free state in normal blood vessels and be able to induce a rapid and localized hemostatic plug at the site of blood vessel injury. Hemostasis is the term for the normal regulation of this process. When an inappropriate or pathologic activation of the hemostatic processes occurs, the result is the formation of a blood clot (thrombus) in an uninjured blood vessel. Therefore, both normal hemostasis and thrombosis depend on three key components, the blood vessel wall, platelets, and the coagulation cascade. The interaction of the components in the initial formation of the clot, followed by strengthening of the clot and the eventual resolution/degradation of the clot are intricate and complex.

Under normal circumstances, the endothelial cells that line the intact blood prevent platelets and the coagulation factors in the blood plasma from ever meeting the extracellular matrix below the endothelial cells. When a blood vessel is injured, the extracellular matrix is exposed to the platelets in the blood and a procoagulant situation is initiated.

Platelets are made in the bone marrow by megakaryocytes and circulate in the blood with the primary function to bind at the site of a wound to begin the clotting process. Any condition that results in decreased platelet production or survival can result in abnormal bleeding. Circulating platelets are normally smooth diskswith an outer cell membrane with surface receptors (glycoproteins). They contain granules comprised of substances essential for the clotting process including: fibrinogen, factor V, von Willebrand Factor (vWF), ADP, and TXA2, etc. Note, endothelial cells also can produce vWF and aid in the clotting process. Thus, when platelets encounter the underlying collagen in the extracellular matrix of an injured blood vessel, they undergo three general reactions: 1. They stick to the collagen(adhesion) and change their shape from round to flat, 2. They release their granules, and 3. They stick to each other (platelet aggregation). 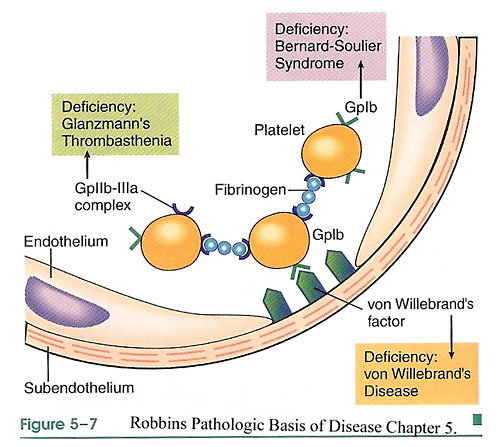 There is an absolute requirement for vWF to stabilize the initial platelets to the underlying collagen in the presence of the high sheer forces of the flowing blood. vWF is essential to bridge the collagen to the 1b glyocprotein receptors on the surface of the platelets. Thus, a genetic deficiency in vWF (von Willebrand disease) or the glyocprotein 1b surface receptor (Bernard-Soulier syndrome) results in defective platelets adhesion and bleeding disorders.

The next phase of platelet involvement (release of granules or secretion) is essential for the initiation of the coagulation cascade. The release of ADP is a potent mediator for the next phase where platelets adhere to other platelets. The initial platelet plug (primary hemostatic plug) is reversible; however, with activation of the coagulation cascade, thrombin is generated, which binds to a platelet surface receptor with ADP and TXA2 and results in further platelet aggregation followed by platelets contraction. This creates an irreversibly fused mass of platelets and is considered a secondary hemostatic plug. At the same time, thrombin converts fibrinogen (an important cofactor in platelet aggregation) to fibrin which stabilizes and anchors the aggregated platelets in place.

The third component to the hemostatic process involves the coagulation cascade (See Figure 2) that is essentially a series of conversion of inactive proenzymes to activated enzymes with culmination in the formation of thrombin. As mentioned above, thrombin is essential for the conversion of soluble fibrin in the blood plasma into the insoluble protein fibrin and the stabilized blood clot. Although divided into the intrinsic and extrinsic pathways with convergence at factor X (ten), the pathways are interconnected. In the interest of space, the intricacies of the coagulation cascade will not be discussed. 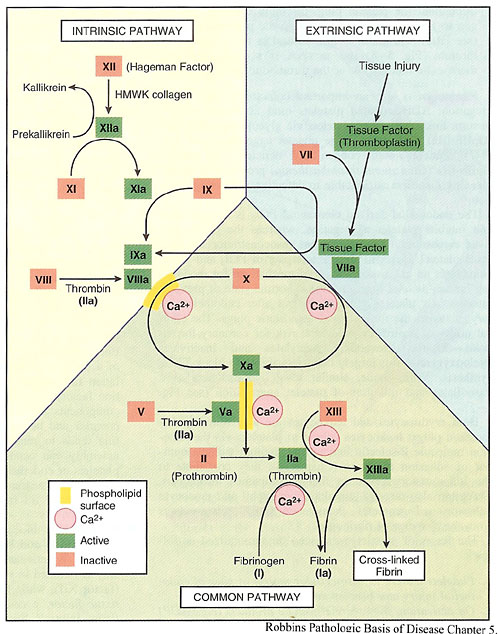 For all chromosomes except those that determine the sex of the individual, the rat inherits one copy from the sire and one copy from the dam. In the case of a mutation that affects the genetic function on one of the genes on one of the autosomal chromosomes, it can be either dominant or recessive. Most mutations exist in a recessive state where it would take receipt of the mutant gene from both parents to cause the disease in the offspring. In the case of a dominant mutation, you would only need one copy of the mutant gene to cause disease. For sex linked diseases, like Hemophilia A, B, the mutations exist on the X chromosome and not theYchromosome. Thus, the condition functions like a dominant mutation in males who only have one copy of the X chromosome and like a recessive condition in females who would need mutation in the same gene on both X chromosomes to show disease.

Hemophilia A and von Willebrand disease (frequency of 1% in the human population) are two of the most common inherited disorders of bleeding in humans. In addition to its function in platelet aggregation, vWF serves as a carrier for factor VIII (eight) and is important for the stability of factor VIII. In normal humans, the stability of factor VIII in the circulation is 12 hours, and only about 2.4 hours in patients with von Willebrand disease. There are more than 20 variants of von Willebrand disease. In most cases it is transmitted as an autosomal dominant disorder, but several rare autosomal recessive variants have been identified. There are two major categories.


Hemophilia A is caused by a reduction in the amount or activity of factor VIII and is inherited as an X-linked recessive trait, and thus, occurs in males and homozygous females. However, in some unusual cases, excessive bleeding has occurred in females with one normal X chromosome (heterozygous) due to inactivation of the normal gene on the normal chromosome. Thirty percent of human patients with hemophilia A have no family history and their disease is caused by new genetic mutations.

Hemophilia B is caused by a deficiency of factor IX (nine) and in severe factor IX deficiency it is clinically indistinguishable from hemophilia A. HemophiliaBis also inherited as an X-linked recessive trait and may occur without symptoms or be associated with hemorrhage. In 14% of these human patients, factor IX is present but nonfunctional.

There is a balance to excessive blood clot formation and thrombosis known as anticoagulation. The key players in anticoagulation are antithrombin III, protein C, and protein S. Mutation in factor C (five) (Leiden mutation) or mutation resulting in the reduction or activity of antithrombin III, protein C, or protein S in humans presents with recurrent venous thrombosis.

I suspect that the cause of the abnormal bleeding reported in the Blue rats is real and probably genetically based. However, without detailed genetics and blood tests to examine both the amount and functionality of platelets and coagulation factors to determine what is not working properly, we will never know exactly what is wrong and be able ascertain how the defect is inherited in these rats.

Answer to Blue Rat Bleeding Disorders & Blue Rat Problems by Karen Robbins
AYes, we have heard of Blue rats that have the bleeding disorder. However, there are some lines of Blue rats that do not have this problem. Since this is a very popular color, more people breed them than other colors so it is becoming more common. We believe this is a problem that is being passed down from generation to generation. Rats that have this problem should not be bred and stock should be obtained from breeders who have successfully had Blue rats produce more than one litter without any problems and have not encountered any other bleeding disorders in their stock. It may take a while to track down healthy stock, but is well worth it to know you will be producing healthy rats for fellow breeders and pet owners. No one likes to see their rat bleed to death.

We have only heard of this problem in the Blue rats (English Blue is the same as AFRMA’s Blue), never in the Russian Blue. Irish is a marking, not a specific color.

Blood clotting tests would be beneficial to breeders that have concerns that their Blue rats may have a problem so they would know whether or not to breed them and continue a flawed line.

As far as skin problems, yes, Blue rats seem to have more issues with breaking out in scabs when fed a diet that is too rich. Usually the owner is feeding a mixture of seeds along with other high-protein, high-fat foods. When they change the diet to only lab blocks and cut out all seeds and fattening treats, give them a bath, and clip their nails, they will see the scabs clear up and disappear. If they then give a treat later down the road of seeds/nuts/etc., and the rat immediately breaks out again in scabs, that shows it is the diet causing the problem. Elimination from further bad treats should keep your pet free from any scab issues.

See the update to testing on https://www.afrma.org/med_ratbitefever.htm.